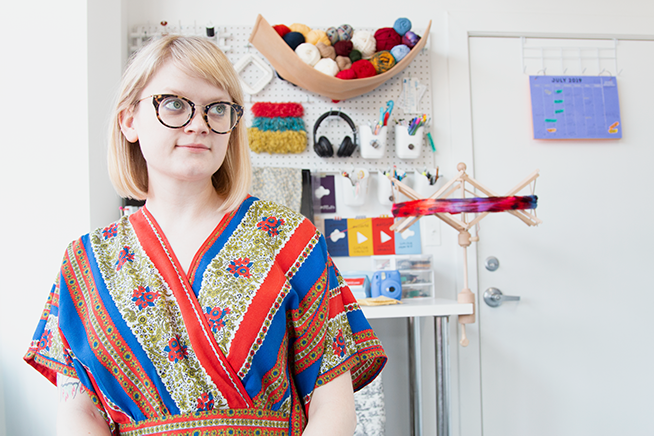 Hands Occupied is the name under which I became a blogger, crafts designer and artist, starting in late 2010. Over the years Hands Occupied and my work has grown and evolved, and these days my work ranges from accessible craft books for hobbyists to fine art tapestries and advanced knitting patterns.

In early 2019, the Hands Occupied Studio opened as a dedicated workspace from which I can run my business, do design work, shoot photos and videos, and develop larger art pieces. (Visit the About page for more on Hands Occupied.)

12/1/21 In 2022, I'll be downsizing to a smaller space. In my already-small space social distancing wasn't possible, so Hands Occupied Studio will officially not be hosting Craft Nights or Crafternoons for the foreseeable future. We had so much fun, and the community is already missed!

Stop (or start?) the presses! My first book, Latch Hook: 12 Projects for the Modern Maker, is now available. Learn where to get your hands on a copy to infuse your yarn crafting with a bit of JOY!

It’s hard to believe it, but it’s been TEN years since the first blog post went live on Hands Occupied. Read a little about the Hands Occupied timeline, the latest Latch Hook book news, and some surprise updates coming later this week!

The Hands Occupied Studio is now open! See the finished space, read about the Studio Warming party, and share your ideas for workshops and events you’d like to see!

Take a first look inside the new, first-ever Hands Occupied Studio in Chicago. Learn what’s in store for the space and how you can get involved!