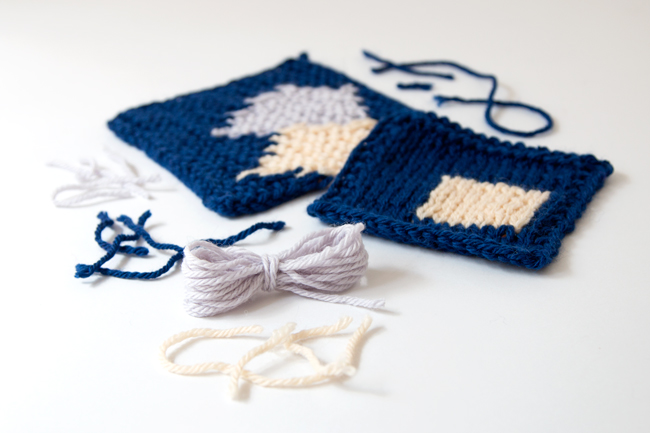 Intarsia. It’s a word that strikes fear in the hearts of knitters, myself formerly among them. First of all, it’s a colorwork technique, i.e. a way of knitting with 2 or more differently-colored yarns to create colorful patterns. Intarsia is special because once you can work the technique, a whole new world of possibilities opens up for you as a knitter. Everything from argyle (one of the most famous knitting designs in the world, achievable with intarsia knitting!) to, well, a picture of a zebra becomes something you can knit into your work. Doesn’t this sound fun?

Also known as picture knitting, intarsia enables knitters to create isolated chunks of color and/or motifs of multiple colors. Intarsia earns its picture knitting nickname particularly when you consider pieces like statement sweaters featuring a single word or image on the chest. In knitting, you’ll most commonly come across intarsia worked flat in stockinette stitch, and your pattern will most likely be in the form of a chart. 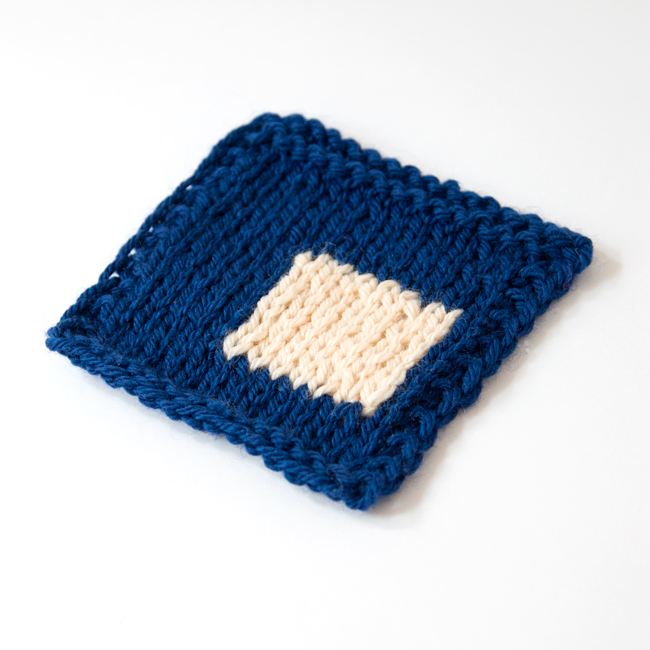 How to knit intarsia

As you’ll learn in the video below, intarsia is accomplished by knitting different sections of a given row of knitting using multiple, separate balls of yarn. For instance, if your intarsia chart features a row in which two colors are worked, you’ll be knitting from three separate balls of yarn. The first and last ball of yarn you’ll work from are the same color, and the second will be a contrasting color. (If you’re a visual learner, watch the video to see how this works.) Often in intarsia, the “balls” of yarn your working from are shorter lengths of yarn, wound into butterflies or on to bobbins. 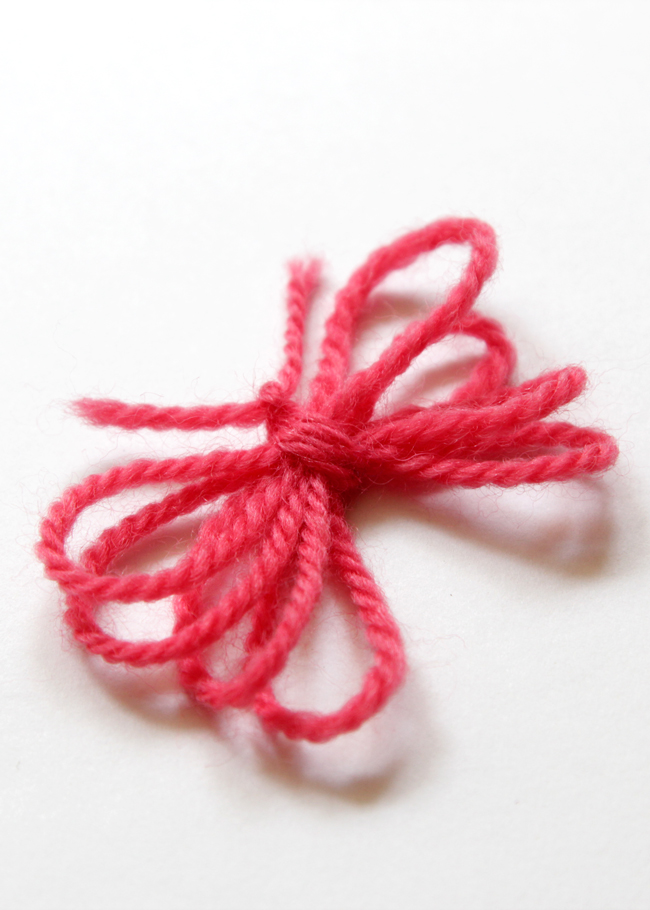 Intarsia is different than stranded knitting (a.k.a. fair isle knitting). In fair isle, you’re carrying one or more strands of yarn in different colors, “floating” the unused colors on the wrong side of your work. Those floats result in several strands of yarn at the back of your work, hence the name “stranded.” 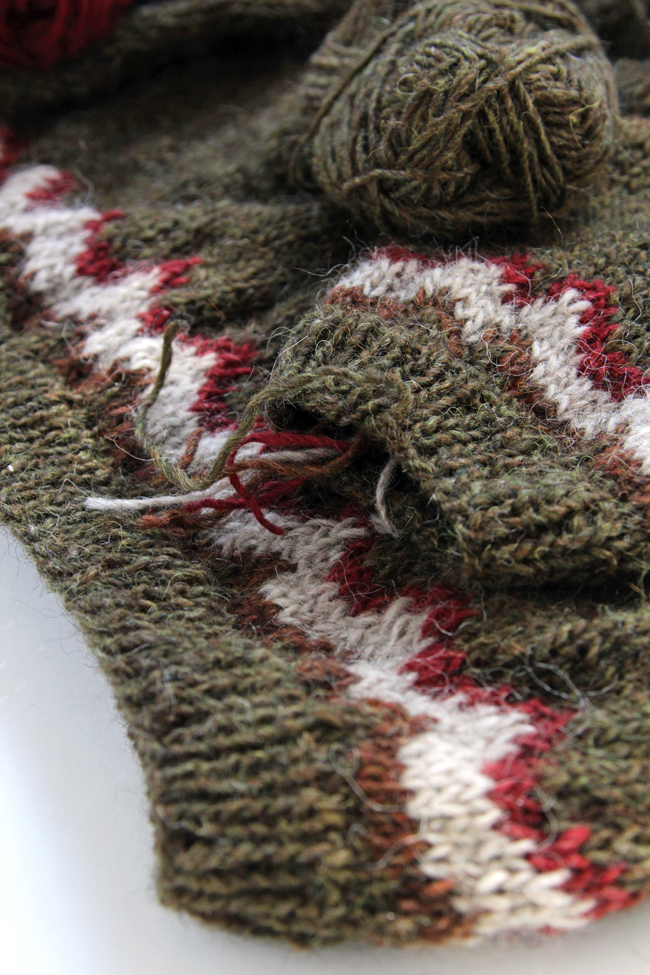 Icelandic Lopapeysa sweaters use stranded colorwork to create motifs worked in the round. Notice that the colorwork runs all the way around each round of this sweater. This is different than intarsia, where contrasting yarn colors are limited to isolated portions of the row/round.

Sometimes reading an explanation of a knitting technique worded two different ways (and especially from two different teachers) is helpful to understand it. During the process of designing my Intarsia Mountain pattern, my pattern Editor explained the difference between the two techniques like this:

In intarsia, different sections of each row are worked in different colors. Intarsia is different than stranded knitting in that the knitter doesn’t carry the unused yarn behind the work. Instead, she drops the old color, brings the yarn for the new color up under the yarn of the old color, and then continues on knitting in the new color until the next color change or the end of the row. This method twists the yarns to close any gaps between the old and new colors. 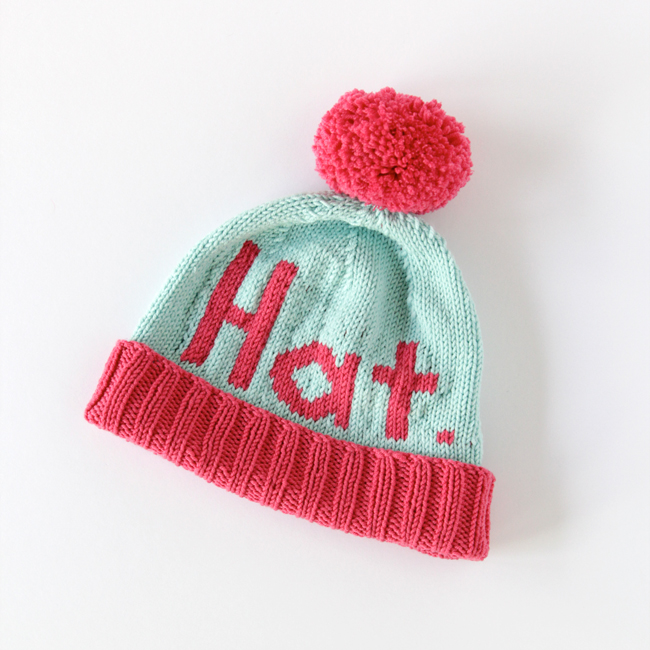 The Hat Hat is an example of intarsia knitting.

If you’ve only knit stranded colorwork up to this point, you’re not alone. Tons of knitters are in the same boat. The biggest thing to understand about intarsia versus stranded colorwork is that in stranded colorwork, stitches are held together by tension across sections of color in the row. In intarsia, sections of color are held together a little bit like a suspension bridge. Differently-colored strands of yarn interlock with each other when you change colors to avoid gaps between stitches at the color change. For a swatch of intarsia featuring a simple shape, the left and right edges of the square interlock with adjacent stitches for horizontal tension, and the bottom and top rows of the shape are knit into the stitches above or below them, just like any other piece of knitting (colorwork or otherwise). 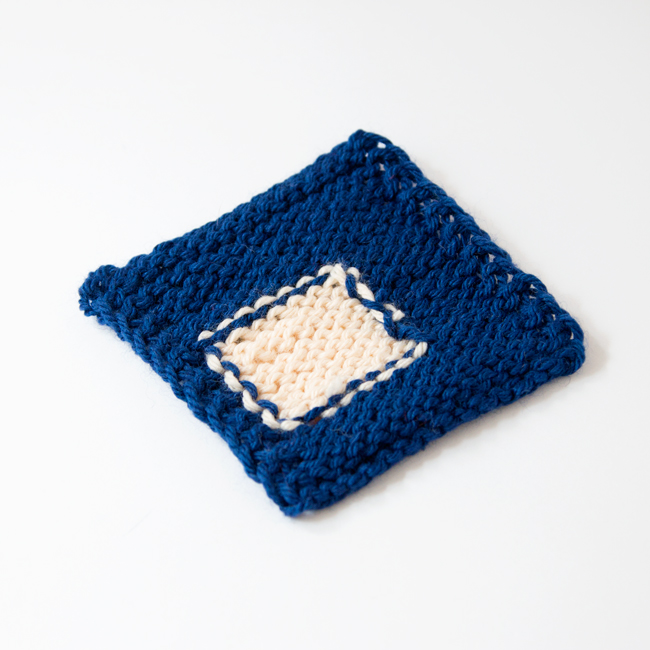 Since knitting is almost always easier to understand visually, I’ll stop yammering about tension bridge swatches and let this video drive home the basics of intarsia. Just remember: The key with intarsia is to ensure your differently-colored strands of yarn interlock with each other when you change colors to avoid gaps between stitches at the color change.

Like I said, sometimes it’s helpful to read several different folks’ explanations of a knitting technique, so here’s a bit of additional reading to help you better understand intarsia. And as always, if you’ve got any questions, holler in the comments or email me at heidi-at-handsoccupied-dot-com.

If you’d like to try intarsia for yourself or brush up on your technique, here’s the chart pattern for the swatch featured in the video. Please note: the chart includes a slipped stitch edging and two rows of garter stitch are featured all the way around the swatch to prevent rolling. 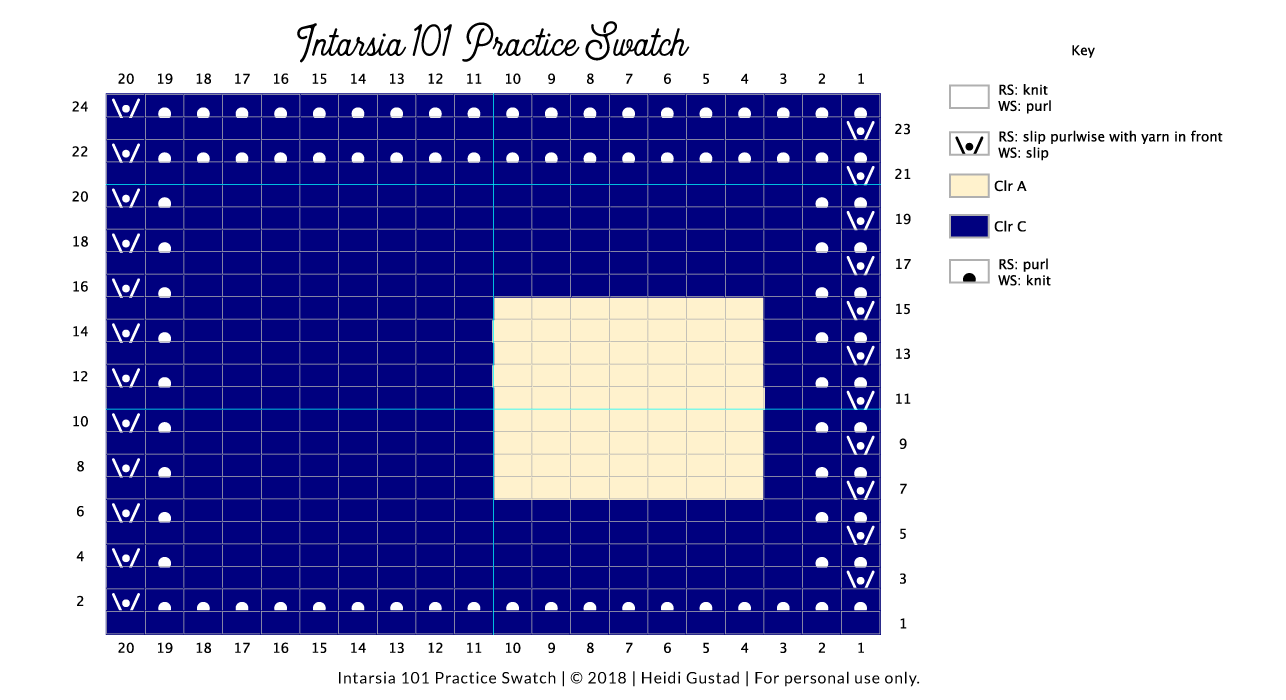 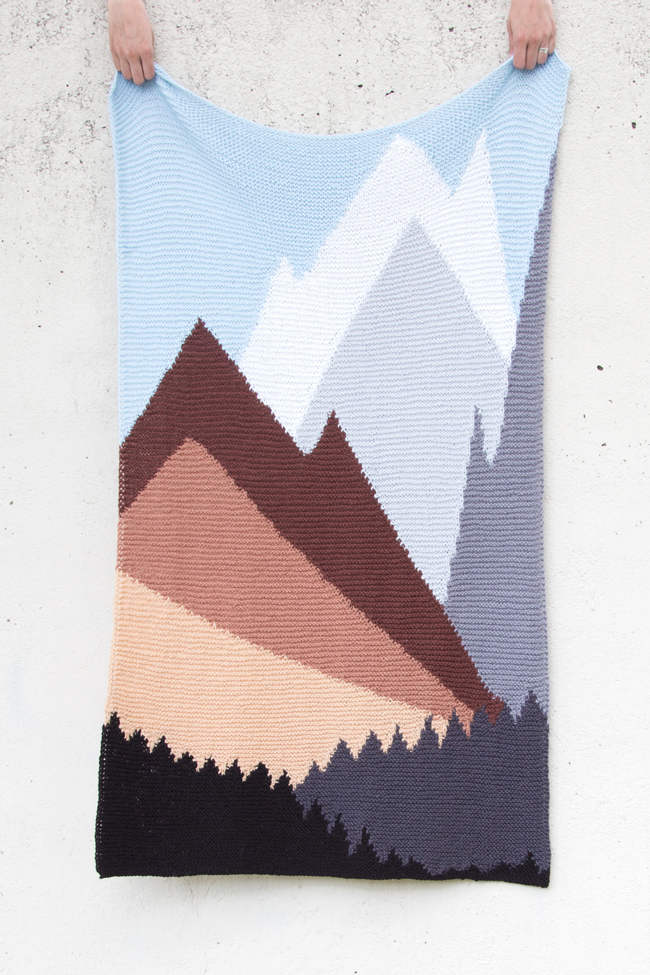 Intarsia & the Read Along Knit Along

This post was published as part of the fall 2018 Read Along Knit Along, during which we’re knitting my Intarsia Mountain pattern. Intarsia Mountain is, you guessed it, knit entirely using intarsia. To accomplish this bold, nearly-reversible design, garter stitch is used in combination with stockinette stitch to achieve the finished look. If you’re RALKALing with us and are ready for more advanced tutorials, head to the Hands Occupied Ravelry Group for great discussion of intarsia and how it applies to making Intarsia Mountain, and keep your eyes on the Hands Occupied YouTube channel for relevant video tutorials that will be published there before the full blog posts about each technique are published on this blog. 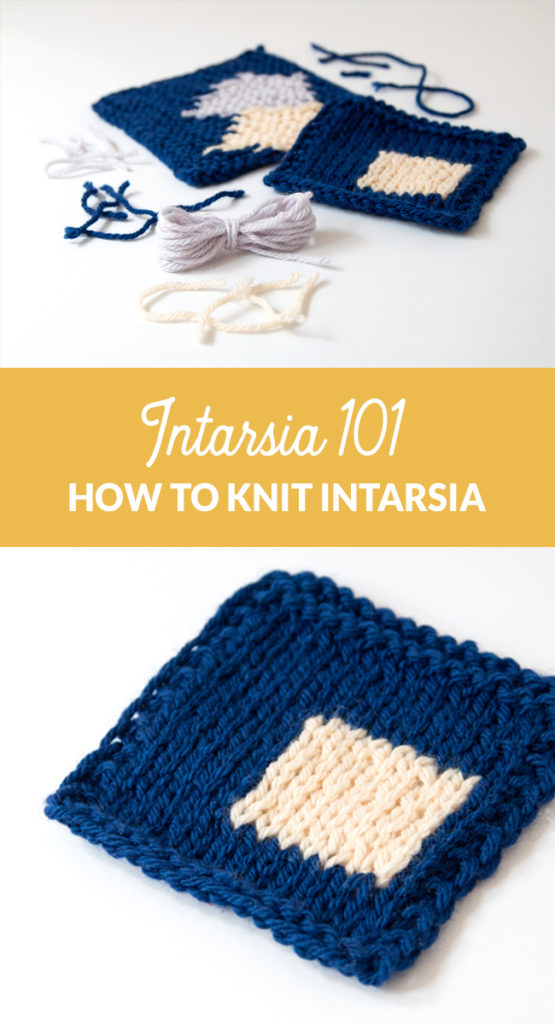