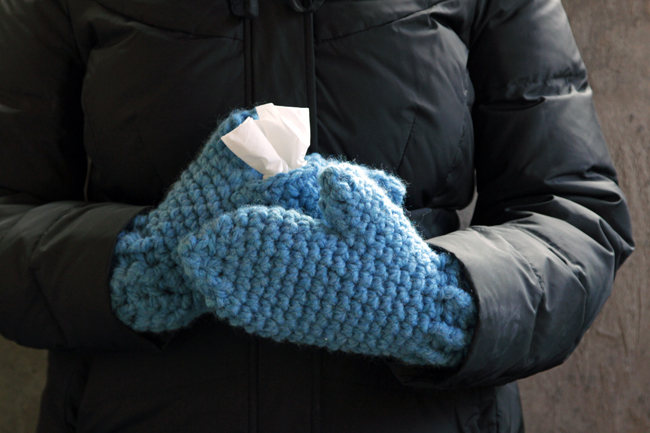 When I first set out to write this post it was going to be about late winter snowstorms and living in the Windy City. Now I’m writing this a couple weeks later than planned because sometimes life hits you like a bus and you just have to roll with it. Three weeks ago, my mother-in-law suddenly passed away from natural causes. Then while we were making arrangements and attending to family out of state, our dog was seriously injured and has required significant care as a result. (She’s now on the mend!) Oh, and my own mom broke her arm this weekend and required surgery. (She’s also on the mend!)

It’s ironic that 24 hours before all of these things started to happen, I signed on to partner with Kleenex to bring you this pattern. I have been spending a lot of time with Kleenex tissues the past few weeks. In particular, Go Packs have been a complete lifesaver. Whether I was reaching for a tissue of my own or handing one (or two) to friends and family, Kleenex has been a constant companion lately. My sniff season has been extended by allergies, Chicago’s crazy weather patterns, and life this year, but I’m so glad that I’ve had Kleenex on hand for when I needed them.

With these mittens, you can keep your hands cozy while keeping Kleenex tissues close at hand! Simply make one traditional mitten, then crochet its mate with an opening to fit a Kleenex Go Pack on top of your hand. These chunky mittens can fit either hand, depending on where its most convenient for you to keep your tissues during sniff season.

Gauge & Sizing
8 single crochet stitches x 10 rows = 4 inches square
These finished mittens will fit a palm circumference of approximately 7 inches, and will comfortably fit an adult hand between 6.5 – 7.5 inches around. However, this bulky mitten pattern can fit up to a 9 inch palm circumference snugly. If you’d like to size up the pattern for someone with large hands, add an additional 2 sts to your initial chain, and distribute the two additional stitches evenly throughout the mitten as you work. 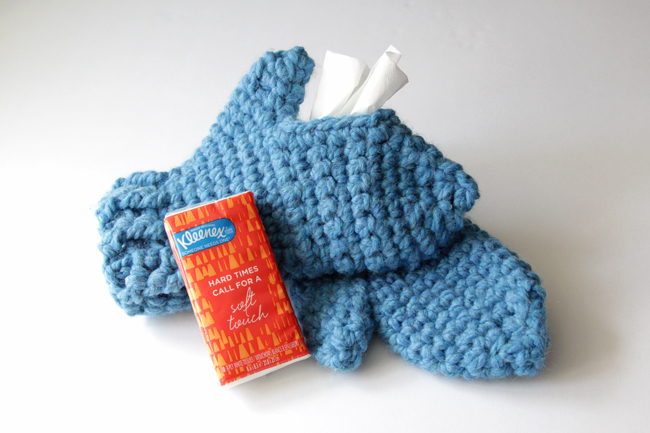 Mitten One (no opening)

Break yarn and draw tail through loop to secure.

Break yarn and draw tail through loop to secure.

Weave in all ends and block to finish.

Cuff
Worked the same as mitten one.

Form opening for Kleenex Go Pack by working rows 7-12 flat, turning from the right side to the
wrong side after each row.

Return to working in the round.

Decrease
Worked the same as mitten one.

Thumb
Worked the same as mitten one.

Define the Kleenex opening
Sc around the opening created by working flat to give your mitten a polished, finished look.

Weave in all ends and block to finish. 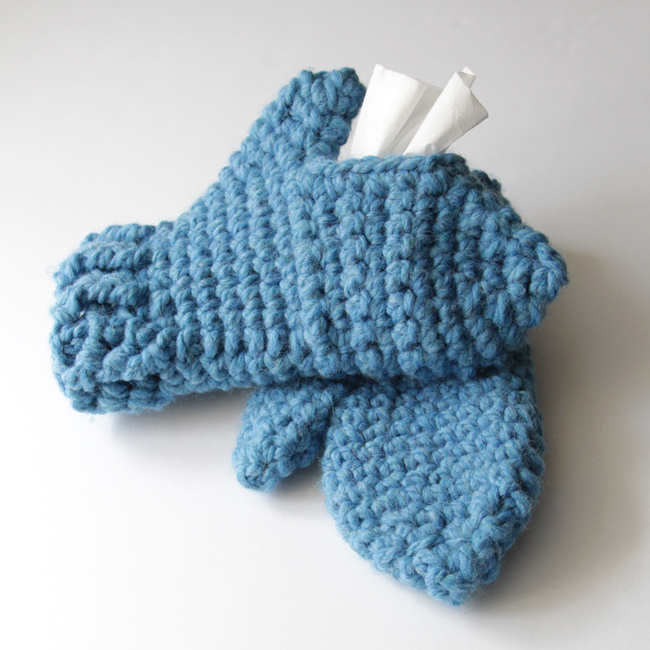 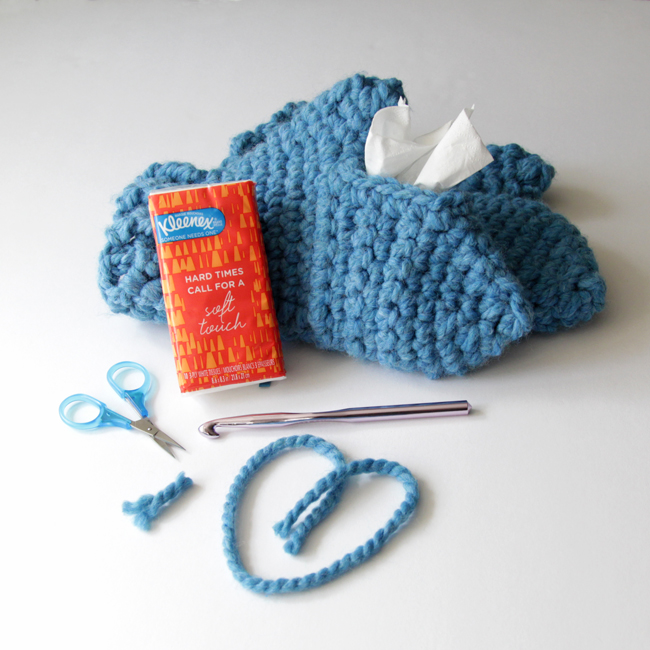