Welcome to Hands Occupied’s first-ever guest post! And guess what? My darling husband wrote it. This might embarrass him, but he was so adorably excited about sharing this. I’ve featured one of his delicious recipes before, but this one is even better. Take it away, hubbie! <3 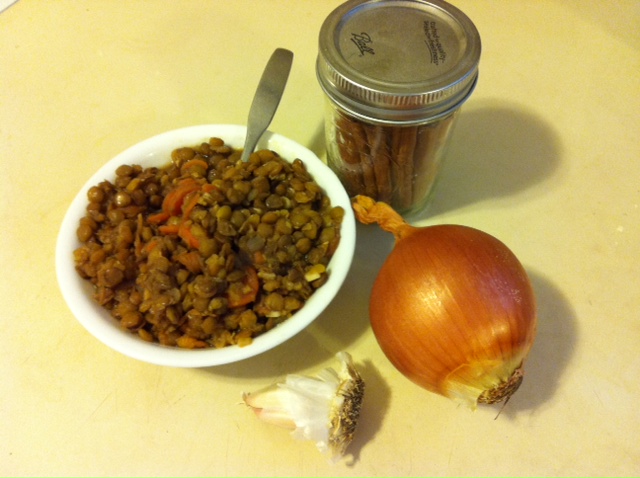 This was an improvised dish made with whatever I had laying around. The recipe was written after the fact, as it turned out really well, so most measurements are VERY approximate. With a soup, though, everything should be to taste. This is your soup, not mine. If you want it more soupy, add more water. If you want more onion, add more onion. If you have no broth or bouillon, just use water. It’s soup; you just put stuff in a pot and then eat it.

Ingredients
1 Onion, diced.
4 carrots, chopped.
6 cloves of garlic, chopped
2 cups of dry brown lentils
3 cups vegetable broth, bouillon or water. (I made my bouillon using Better than Bouillon paste, which I don’t think is completely vegan.)
1 cinnamon stick
1T dried oregano
1/3 cup lemon juice (I used Real Lemon this time, but fresh is always better. Also, this is an estimate, so you should use it to taste.)
olive oil
salt
pepper

Heat two or three glugs of olive oil (or whatever oil you like) in a big soup pot on high. When it’s hot, add the carrots and onion. Add some salt and pepper and stir to coat. Partially cover the pot and let it cook until soft, stirring occasionally. When its soft, add the garlic and let it cook for another minute or so. Then, add the water or broth and bring it to a boil. (In my case, I added 3 cups water, brought it to a boil and then stirred in 1T of Better than Bouillon). Add the dry lentils and bring it to a boil again. Add the cinnamon stick. Boil for about 3 minutes. Reduce to a simmer and partially cover. Every few minutes, stir the pot and add more water if necessary. I ended up adding about 2 more cups of water. How much water you add will determine the consistency of the soup. If you want a more brothy soup, add more water. If you don’t, add less. Cook until the lentils are how you like them and the soup is the desired consistency. Add the lemon juice and oregano. Stir and cook for another minute. Taste, add more spices, salt or pepper if you like. Remove the cinnamon stick. Serve hot.

It would probably go great with some crusty bread, but we ate it by itself today.