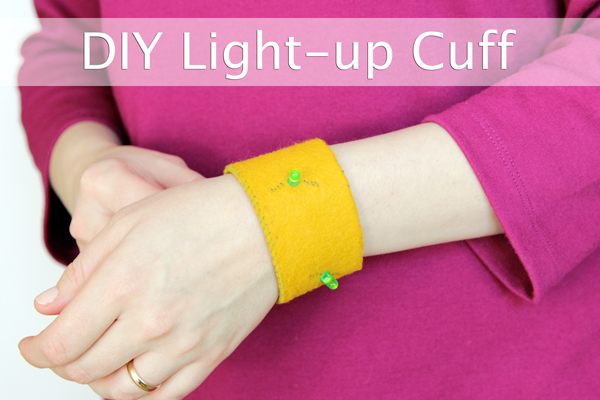 Etextiles are pretty cool, but somehow actually attempting an electronics project didn’t happen until this week. I’m so glad I finally took a workshop because etextiles are SO COOL. And not nearly as scary as I thought. Not by a long shot. Today’s tutorial covers the very basics of working with LED bulbs and creating a simple circuit with conductive thread to make a bracelet that lights up when you wear it.

I’ll reiterate that I’m a newbie at this, so I recommend also taking a look at these related projects before you begin if you’ve never tried extextiles: Make / Instructables. These sites’ instructions go more into the science I don’t feel qualified to attempt explaining. :) 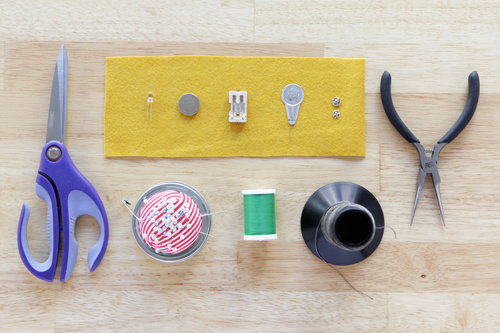 The first thing to learn when working with LEDs is the anatomy of a single bulb. There’s a long and a short wire attached to individual LEDs, and the long one is positive and the short one is negative. (Learn more about how LEDs work here.) 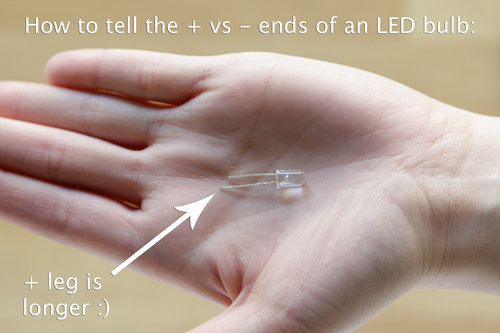 Cut a piece of felt into a 9.5 x 3.5 inch rectangle. Fold the rectangle in half lengthwise, and punch the LED’s legs through the very center of one of the layers of felt. 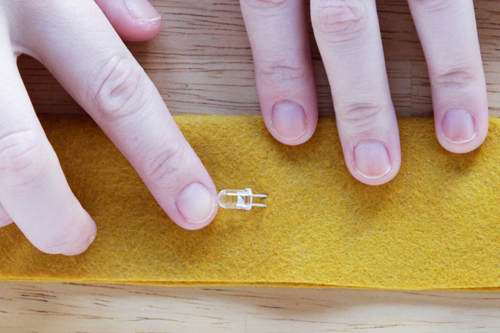 Open your folded felt rectangle back up, and using your needle nose pliers, bend the longer leg of your LED at right angles and the shorter leg into a spiral. Fold the legs so they lay flat against the felt, as shown. I found it helpful to have all my – ends pointing to the nearest raw edge of the felt rectangle, and the + ends, the other edge. 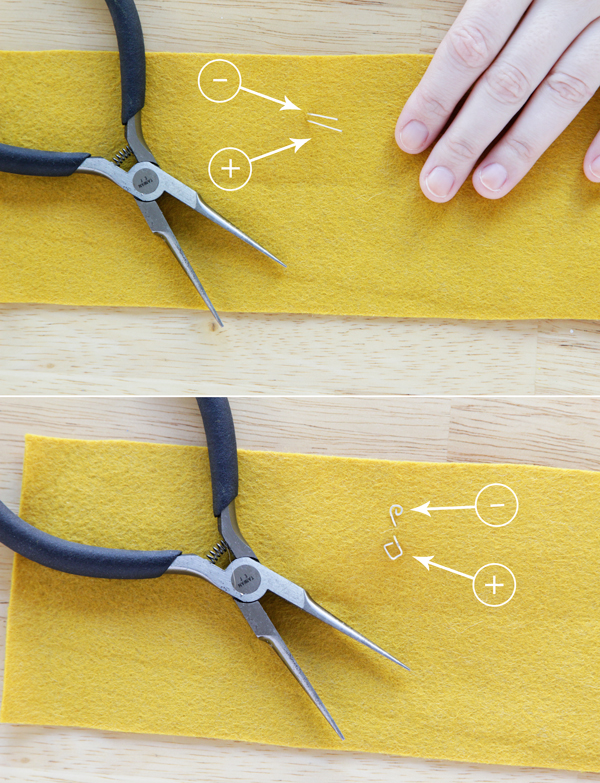 Sew your snaps to each end of your cuff using regular thread (there are more pictures of where I place mine in pictures below – I forgot to take some as I worked on the cuff, my apologies!). Thread your needle with conductive thread, and sew all of the – ends of the LEDs together. Then sew all of the + ends together in addition to sewing one of the snaps to the +’s.

Lost? Confused? Instructables has some great tips for making a similar project. 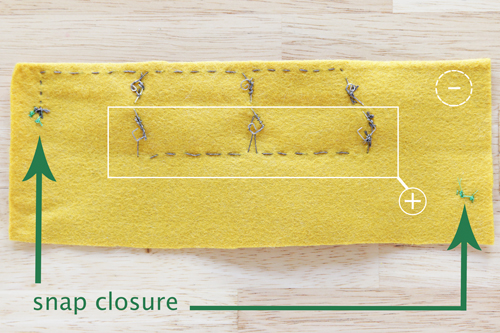 Here’s what the other side of my in-progress cuff looked like. Notice the placement of my snaps. :) 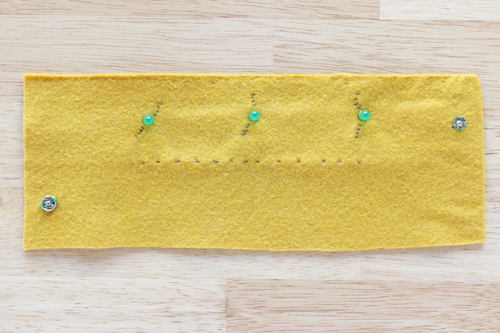 A close-up of the conductive thread making an appearance on the outside of my cuff. I kept it as subtle as possible, but that’s the challenge of working with extextiles – making them look good! The dashes of thread are visible here because they’re wrapped around the legs of the LED. 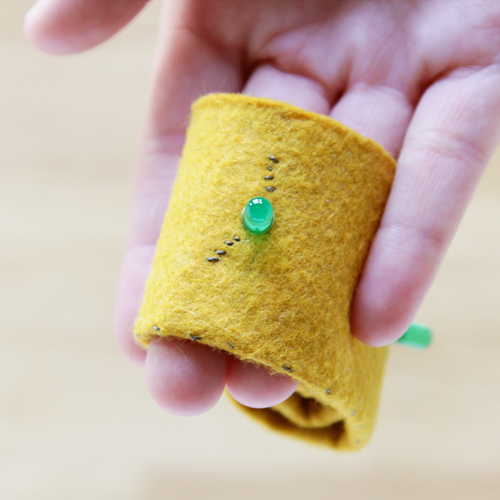 Slip your battery into its holder, making sure to put it in right side up (look for a + or –  before sliding in the battery). Sew the + end of the battery pack to the last + LED leg on one end. 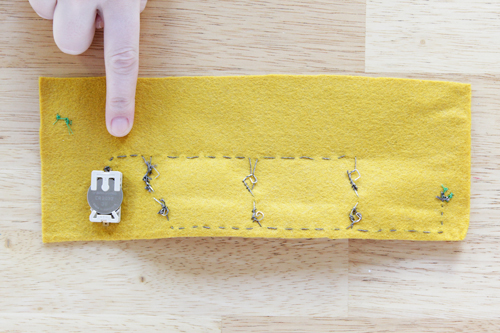 The last connection to be made to get your lights to illuminate are the second end of the battery holder to the snap that hasn’t yet had conductive thread sewn through it. Before you do that sewing, you’ve another step to do. 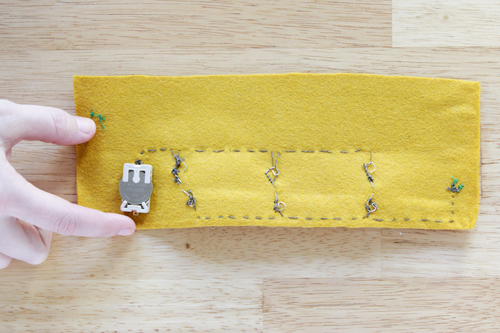 Fold your rectangle lengthwise. Using regular thread, whip stitch along the short edge of the non-battery end of the bracelet and then the long side, stopping just before the battery holder. 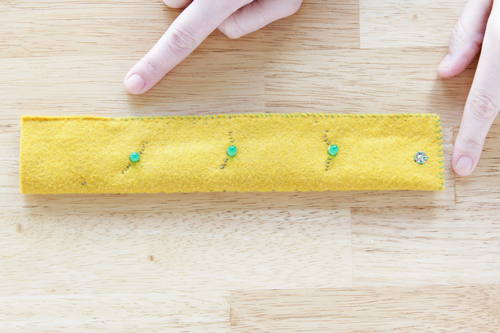 Mostly sewing up the bracelet will help you sew the snap to the battery pack. 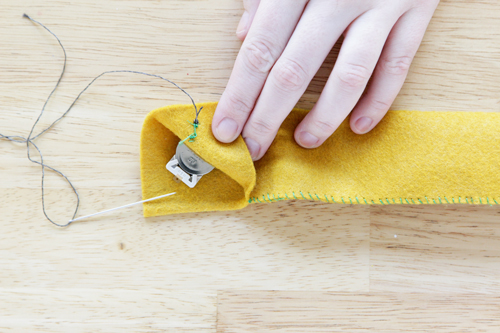 Here’s how I sewed the battery & snap, despite the battery being on one side of the felt and the snap being on the other. 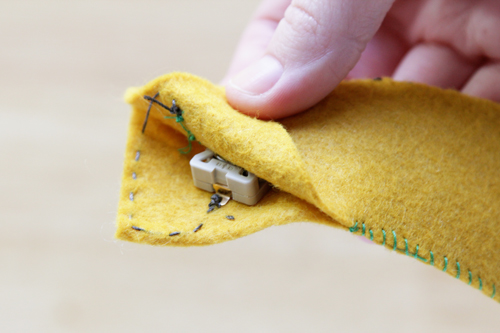 At this point you can test your bracelet to see if it lights up by touching the snaps together. If your circuit was sewn correctly, you should be all set. If not, you’ll need to backtrack, locate the issue and try again. My first LED bracelet took me a few tries to get right! 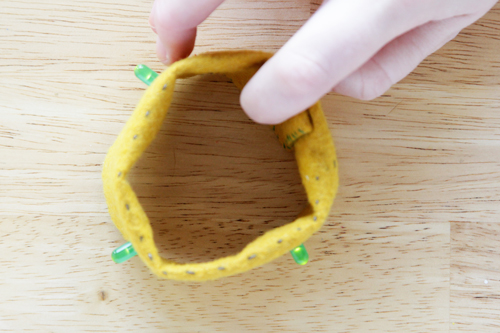 When you know your bracelet is functioning properly, you can whip stitch around the last of the open ends. 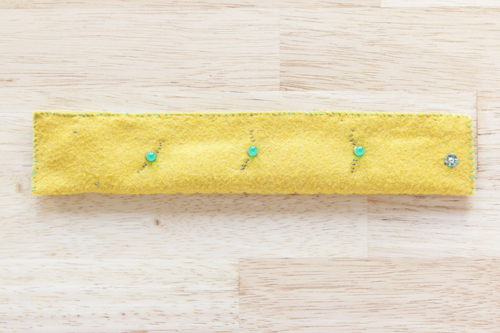 I like to leave a little slot for replacing the battery as needed. It’s a pretty simple little bit of construction, but useful! 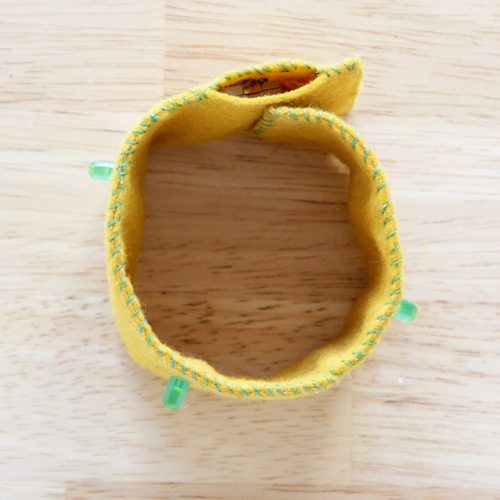 So, what do you think? Thumbs up? Too crazy for you? Or does this now seem doable? Maybe in a few years or after a few beers (for courage ;)) ? 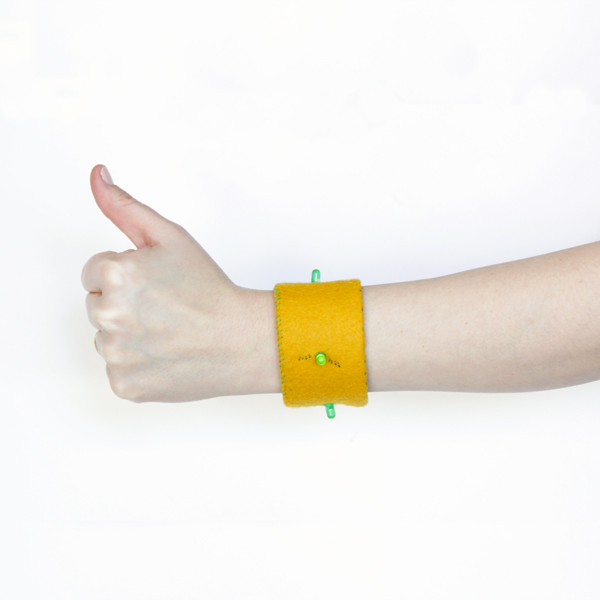