Saturday was quite the day for this bride-to-be. I began the day with a two-hour wedding hair test appointment at Rubie’s Paradise Salon. Since my daily hair routine generally consists of a shower and drying my hair while watching videos online, I always underestimate how long it takes to do something complicated to one’s hair. Anyway, my hair stylist did some awesome work, and I finally got to see how the hairpiece I made for the wedding looks (I’ll be posting the how to later this week). It looks pretty sweet, if I do say so myself.

Since I underestimated how long it would take to do my hair, the fiance and I went straight from the salon to our shower at his grandparents’ house. The shower was amazing, the gifts were very much appreciated, and the decorations and food were awesome. My fiance’s cousin and aunt planned the whole thing, and the cousin even made some artichoke and asparagus candle holders that she’d seen on our wedding website! Very thoughtful.

A different cousin of my fiance’s made some killer rosemary bread, pictured in the middle above. Also in the middle above are some daisies, courtesy of Kat from Ginger and the Geek. Yet another cousin is an excellent cake baker and decorator. She whipped up this delicious lemon layer cake with raspberry filling, lemon frosting, and she even decorated the cake with our wedding emblem! It was so cute and delicious. 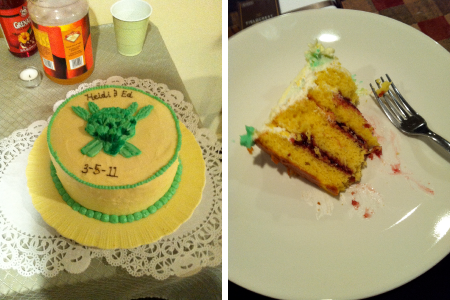 Getting married has been an adventure, and we’ve still got five weeks before the frigging ceremony! My immediate and extended family all live in North Dakota and Minnesota, and my fiance’s immediate family and mother’s side of the family live in Arkansas. His dad’s family, which consists of two parents, nine kids, their spouses, and a LOT of grand- and great-grandkids, has continually surprised me with their unending support. I would not have had a bridal shower at all without them, and I’m glad they threw this together. THANKS, GUYS! :) 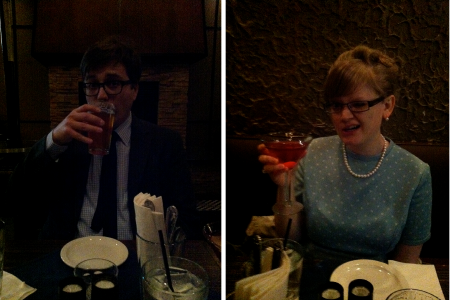 After theÂ hullabalooÂ of the shower, my fiance took me out for martinis so I could live out a Mad Men fantasy. Between a couple heads literally turning at the bar (I had a Joan moment, yay!) and all of the nice comments left by Facebook friends on my new profile picture, the day ended on a sweet note.

PS: One great thing about being the guest of honor on Saturday was getting to bring home all of the candle holders and flowers. Now I’ll get to look at them all week.