At this time last year, I was experimenting with ovo-vegetarianism, which basically means you don’t eat meat or any animal product, other than eggs. I had many reasons to start eating dairy again last summer, not the least of which was that cheese is really tasty (just being honest :) ). I also found it really challenging to attend work or family functions. People don’t know what to serve you beyond carrots and bread. I’m hypoglycemic, so eating nothing tends to result in migraines, shakes and fainting.

To make a long story short, I try to avoid dairy at home, but when I go out, I tend to splurge. The recipe below is one that is great for meat or dairy cravings if you’re new to vegetarianism/veganism. It’s also completely delicious. My husband has been vegetarian for 12 years or so, and I’ve been vegetarian for about 3.5 years. While we don’t miss meat very often, cutting back on dairy can still be a bummer. This recipe makes two peppers, which is about a perfect amount of food for a full meal for two.

Preheat oven to 350 degrees. Rinse peppers. Cut around the stem of each pepper, grab the stem, and rotate it until it pulls loose. 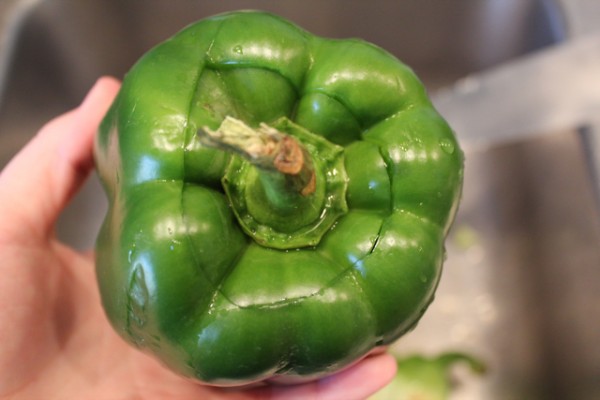 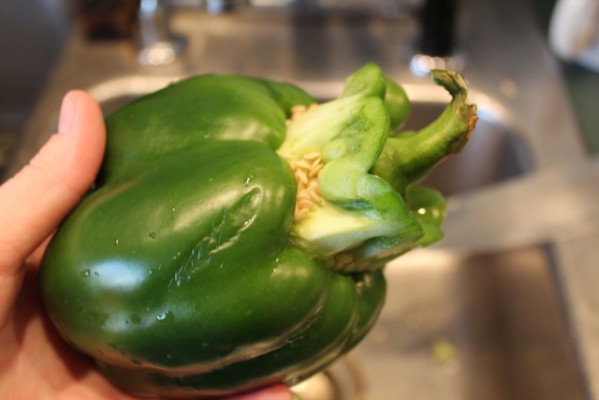 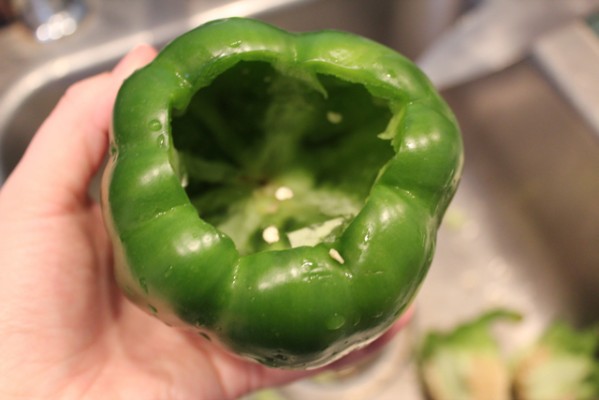 Rinse excess seeds from the inside of the peppers and set both aside as you prepare the peppers’ filling. Warm 1/4 c. olive oil in skillet over medium high heat. Mince garlic and as much of your onion as you like, about 1/4 of an average-sized onion worked for me. 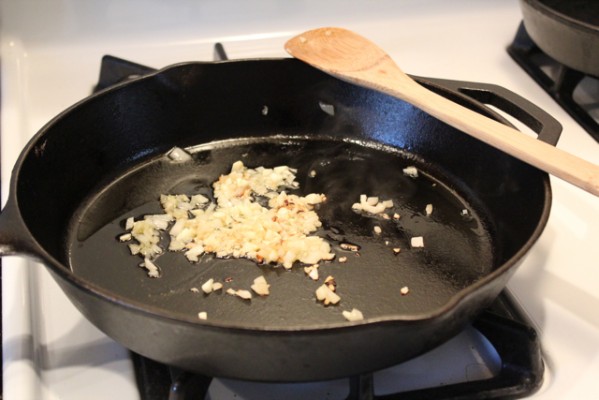 Open the seitan and crumble it into the pan once the onions have begun to brown. Upton’s chorizo seitan comes flavored with spices that make this recipe come together, flavor-wise. 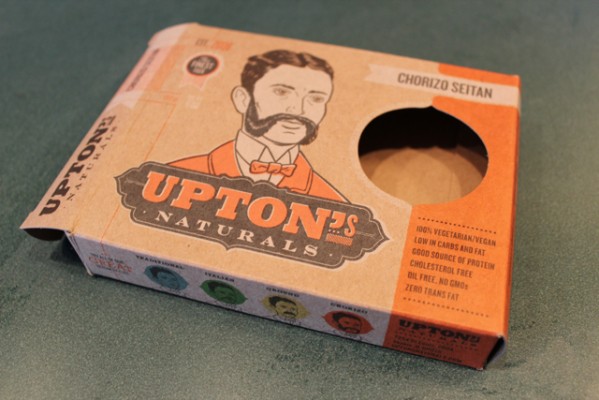 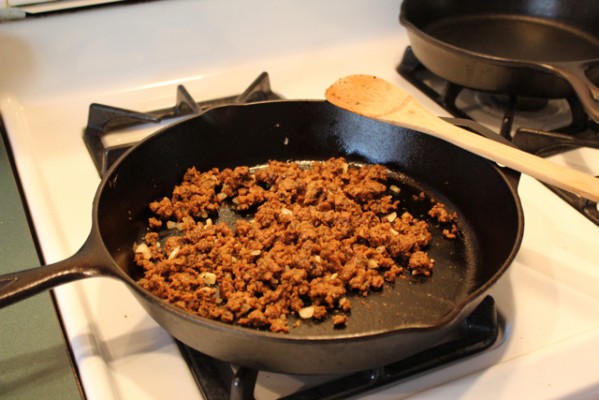 Pour 1/4 cup water over the skillet to keep the seitan mixture from drying out. 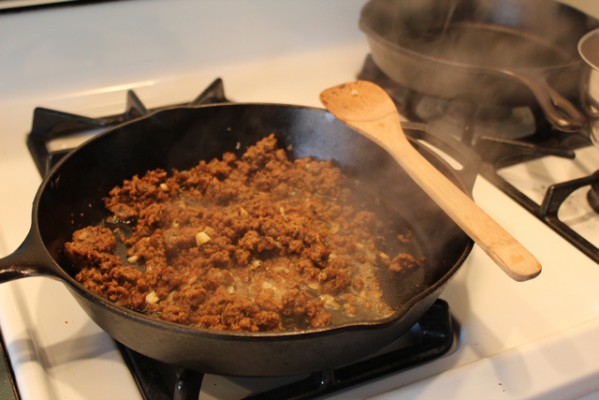 By now, your oven should be preheated. When the seitan mixture finishes cooking, layer it inside the peppers with the Daiya cheese using a spoon.

Fill an oven-safe pan or bowl with about a 1/4-1/2″ of water. Carefully Â set the peppers in the pan and place in the oven. Bake for 3o minutes. 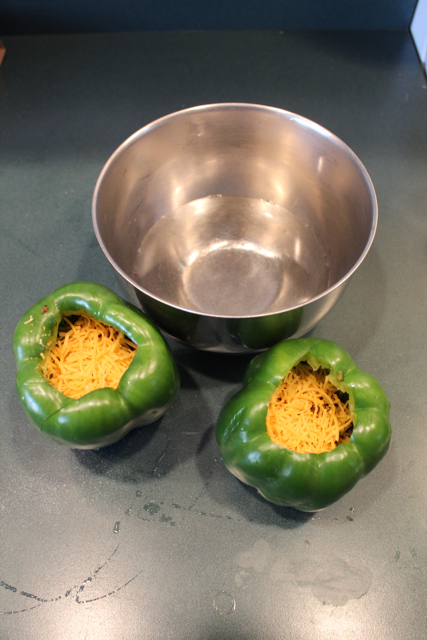 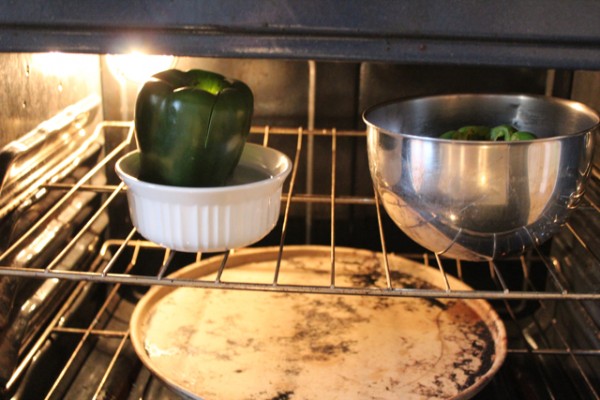 After 30 minutes, check the progress of their peppers’ baking. I squeeze the sides of the peppers to make sure they’re appropriately soft. It tends to take 45 minutes to an hour for these to cook, but when they’re done, it’s so worth it. 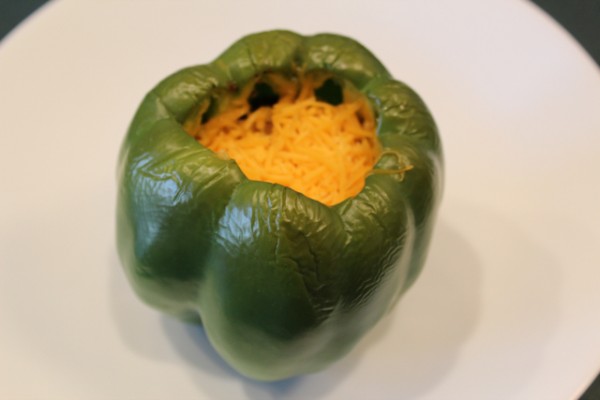 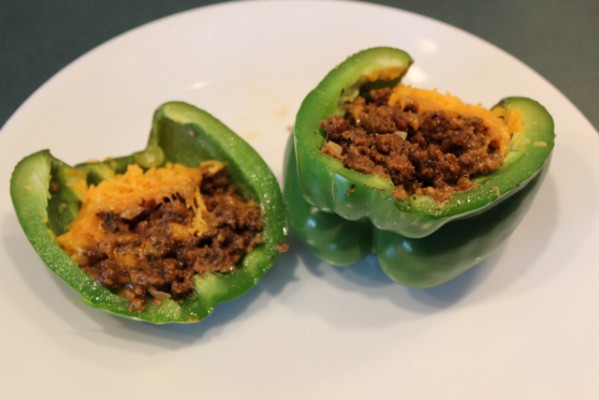 You can also make these easily with beef and regular shredded cheese if you’re not veggie, though you’ll need to include some taco seasoning if you use beef or unflavored seitan. These last for a few days as good leftovers and made great frittata/omelette filling if you’re an egg eater.