The first successful garden harvest of the season means my first vegan vittles post in a few months. This is one of my favorite quickie recipes when I’ve got some greens on hand. I had this for my breakfast on Saturday, immediately after harvesting some swiss chard to use, so this version of the recipe serves about one.

BBQ sauce of your choosing

My husband, an Arkansan, loves loves loves his cast iron skillet collection. So much, in fact, that he convinced me to get rid of a bunch of my regular cooking pans when we moved in together. I’ve begun to love the way cast iron cooks, despite the extra care that must be taken with it. Anyway, you can use whatever pan you want, but your final result might not be exactlyÂ like mine if you use a modern skillet.

Put your skillet over a burner on a medium high setting and put your oil on to warm. Dice your tempeh. Wet your fingers and flick just a little bit of water on your pan. If it sizzles, add tempeh to the skillet. Arrange tempeh cubes so that each piece has one side resting flat on the skillet’s surface.

As the tempeh cooks, cut your swiss chard leaves in to small pieces. Check one piece of tempeh for desired brownness. If satisfied, turn your tempeh to cook the opposite side until that is also cooked as desired, but leave a little room for your tempeh to cook more.*

Add some BBQ sauce, swiss chard and salt to your skillet. Working quickly, sear your greens. When they’re all set, remove the whole mess from the skillet. Being a lover of BBQ sauce and a vegetarian, I added a lot more sauce to the finished product. 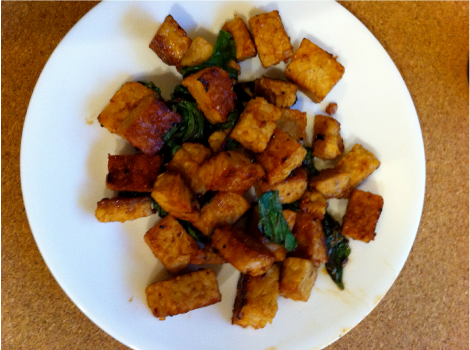 Vegetarians/vegans don’t really get to scratch the BBQ itch too often, which is why I love this savory dish. I also enjoy marinating tofu in liquid smoke and searing that on cast iron. Let me know if you have any other tasty BBQ suggestions to share!

*My husband, the cook in our marriage, says once that first side is cooked, he uses a simple taste test to decide when the tempeh’s done. No matter your method you’re probably not going to get food poisoning from undercooked soy. Just saying.Â