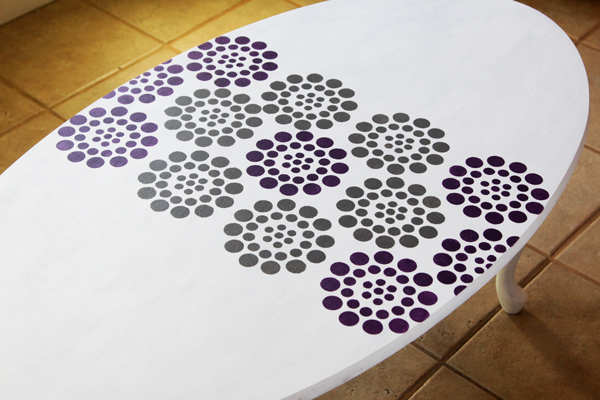 I got to try one of the new Stencil1 stencils this week, which I was really excited about because I’m a fan of Ed Roth, the designer behind the line. He’s known for bridging the gap between street artists like Banksy and craft world faves like Martha. In short, this line is right up my alley. I’ve had a sad, sad, sad coffee table lying around for years, and these larger stencils were just what the DIY doctor ordered for it.

Phase 1: Prep Table
(and a bit about my bummer of a DIY surprise)

So this was my nasty table just a few days ago. Cracked, worn at the edges, some varnish worn off, a handful of paint splotches here and there… the kind of wear you’d expect out of a coffee table gotten for free in college that’s been used way too many times as a crafting surface. But I’d kept this thing on hand for a makeover project for years because it had a pretty woodgrain pattern on top. 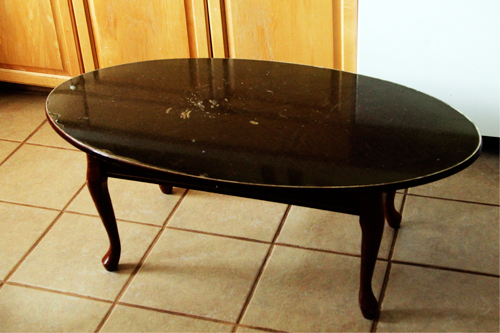 The first step was to sand off the varnish from the table. I hit a bit of a roadblock when I realized my tabletop had a weird plastic, non-varnish layer stuck HARD to it. The solution for me was a window scraper that uses razor blades. I basically needed something that could slide under the edge of the plastic and pop it off. As I worked, it became clear that the super lovely woodgrain pattern on the top of my table was just a big sticker held down by that strange plastic. Wah wah… Good thing I had a makeover planned for it in the first place! 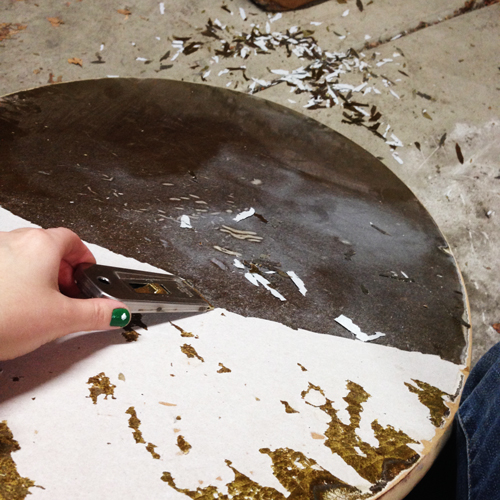 Ok, so if you are working with a normal table without strange stickers and plastic, your job will be much easier – just sand off the varnish. If you want, you can get a solution to paint on varnish to dissolve it, but I sometimes like doing a physically-involved project, so I whipped out the ole power sander. 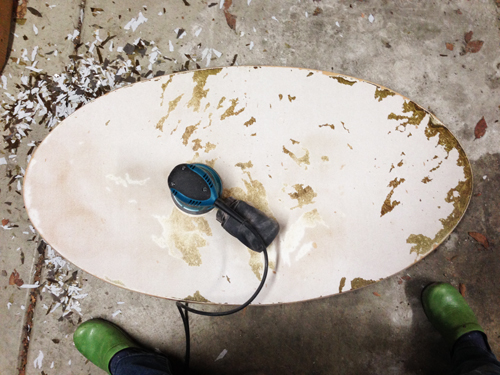 After you’ve sanded everything off, paint your table with a layer of primer and let dry. Now you’re ready for the fun part! 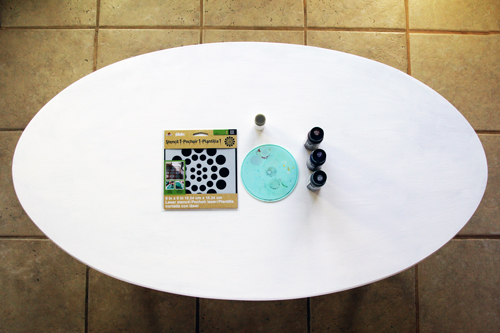 Using a tape measure, find the center of your table and lightly mark it with a pencil. Line up your stencil on it and secure with masking tape. Squirt some paint onto a mat or waxed paper, dab your spouncer in it, wipe excess paint from your spouncer onto the mat, and dab paint all over the stencil, being careful not to let paint leak under it. 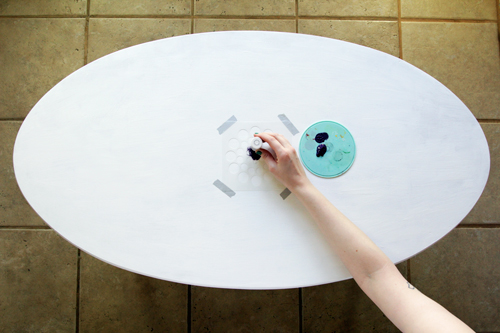 Carefully remove your stencil and rinse it off, as well as the spouncer. (The stencils are mylar, so they’re super easy to rinse off, btw.) Before moving on to the next stencil, make sure your stencil and spouncer are both completely dry. As I’ve said in other stenciling tutorials, you’ve got to work with a dry spouncer every time to avoid diluting your paint and affecting how it will turn out.

Next, measure and mark where you want your second stencil to go and again secure it with tape. 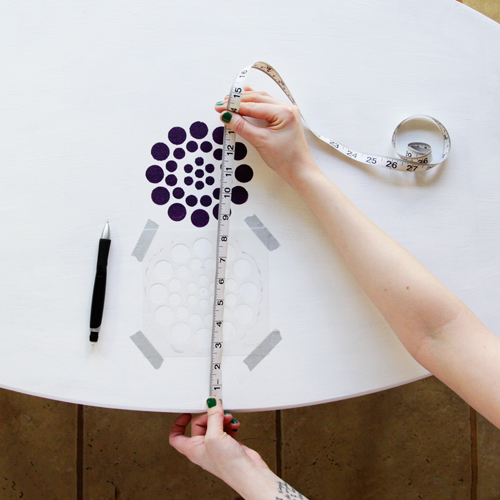 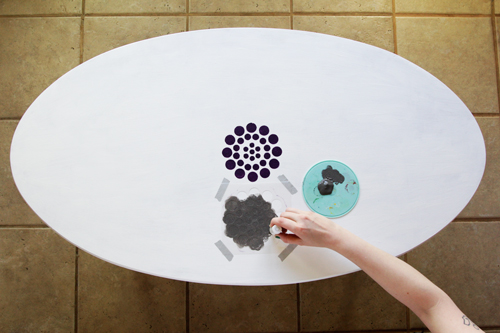 Repeat the spouncer painting, stencil and spouncer cleaning, measuring and marking until you’ve achieved a design you like for your table. 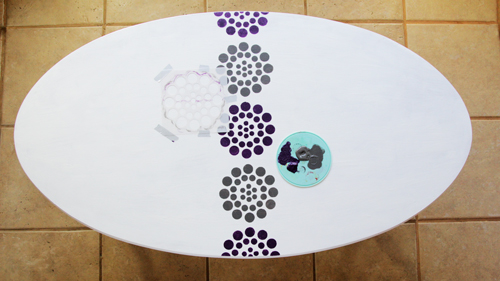 I used light gray and eggplant colors for my design, and I like how it turned out! 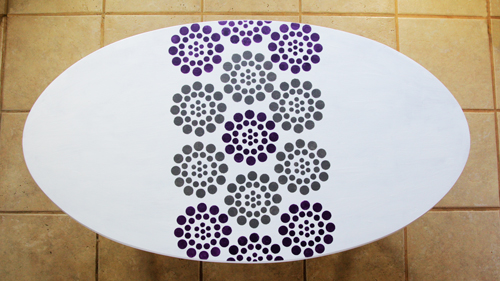 The design is kind of like an uber-modern lace detail right down the middle of my newly-not-hideous coffee table. I tried to mimic the center motif of the stencil in placing my gray circles since they made me think of flowers and beehives, which are personal faves. 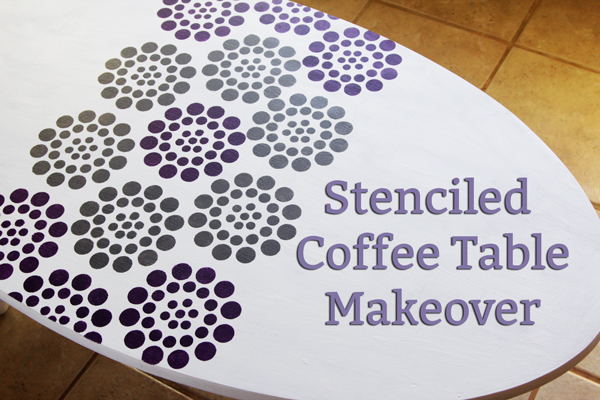 Look at the difference! I can’t believe I tolerated the janky sad table as it was for so long – we’re talking like 5 years. What was I thinking? 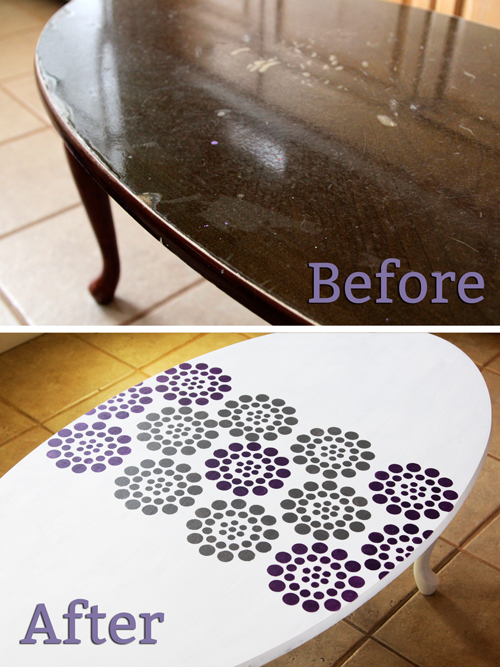 What do you think? Love it? Hate it? What would you do differently? I love hearing inspiring ideas from you guys. :)

This post was written as part of a campaign with The Blueprint Social for Plaid Crafts. All opinions are my own. To learn more about Plaid products, check out their Plaid Palette Blog, Pinterest, Facebook,Twitter, YouTube, or Instagram!