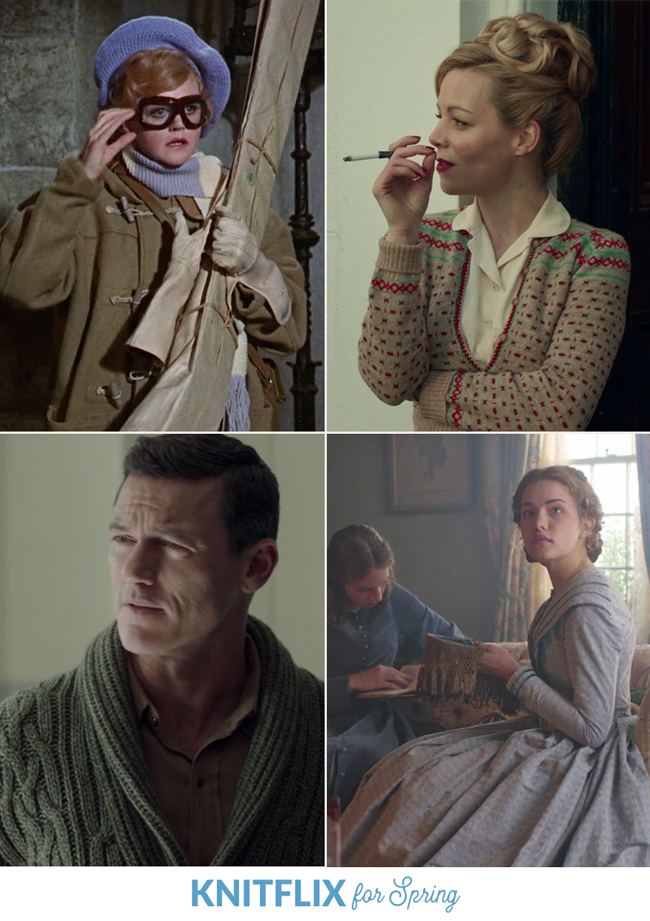 Ahh spring, when we finally have temperate, sunny days. But also, “Ahh, spring!” when we have days on end of rain. On top of the weather, there’s just something about a season change that gets you in the mood for marathoning a project til it’s done, which means you need something to watch while you knock it out! Here are four new picks that have really brightened up some recent knitting and sewing sessions of mine, and how they fared in terms of representing knit and crochet. 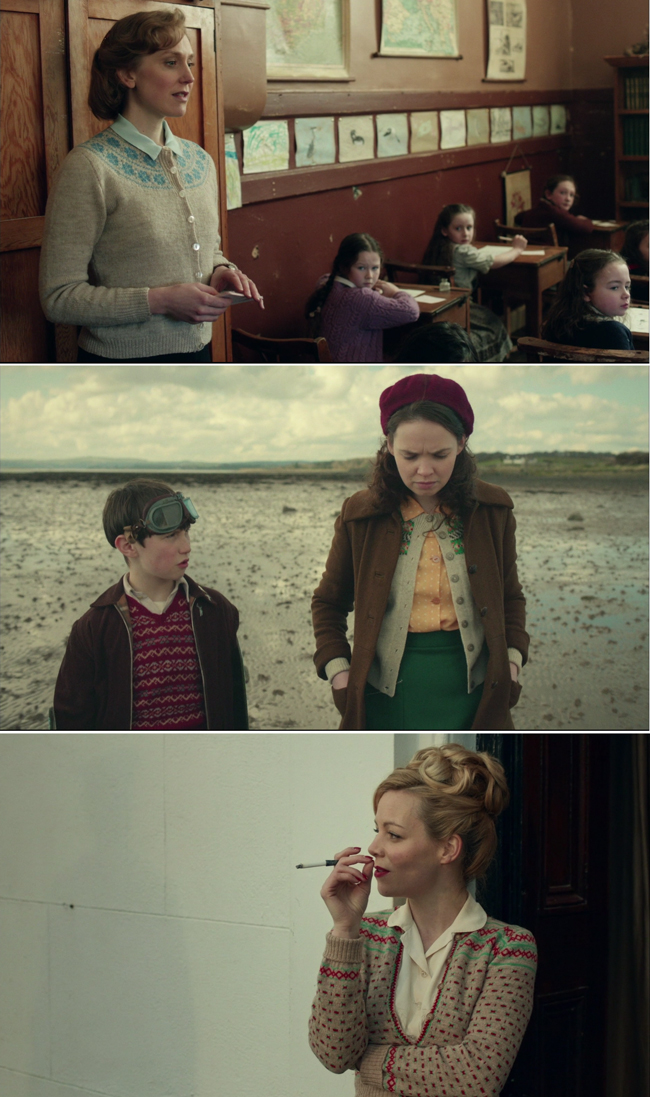 I do feel like it wouldn’t be a Knitflix post without there being some kind of show set in the British Isles during World War 2! My Mother and Other Strangers is set in a rural village on the shores of Northern Ireland, the fictional town of Moybeg. The show begins in 1943 with locals reeling from the recent opening of an US Army Air Force in their area, introducing thousands of strangers to their otherwise-insulated community.  It’s a show about marriage, family, and dealing with change, and I really enjoyed it. The show was produced by the BBC and aired in the United States as part of PBS’s Masterpiece.

Worth the watch? If period dramas are your thing, this is a good one.
Does it feature knitting or crochet? There’s a TON of amazing knitwear, and even one or two crochet pieces.
Available to stream? You got it.

PS: Thanks, Tammy G. for suggesting My Mother and Other Strangers via the Knitflix suggestion form! I hadn’t heard of it before your submission, and I loved it! 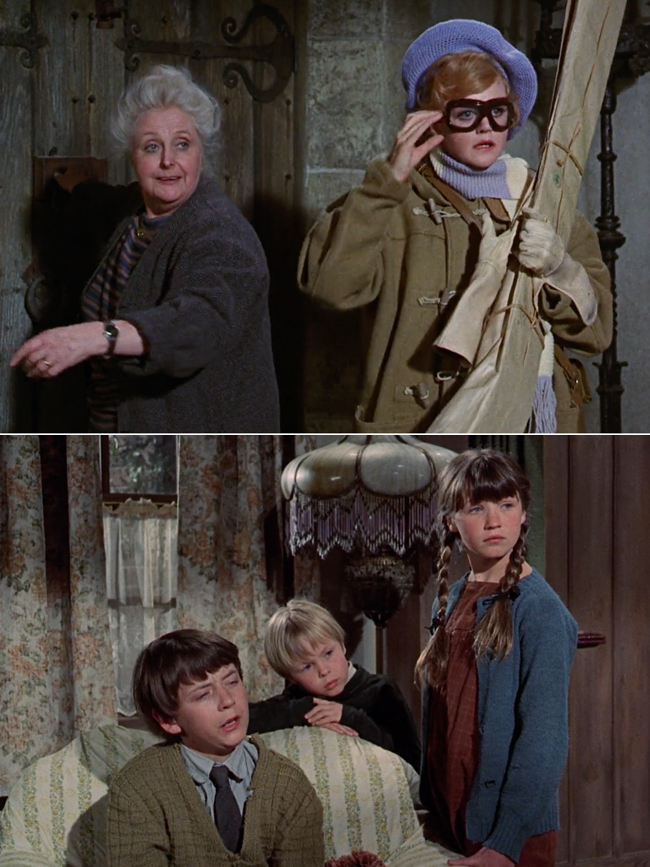 Ok, it’s another WW2 movie set in England, I know. BUT! This one’s an absolute classic. Technically a kids’ movie, this trippy musical takes audiences from flying through the air on a magical bed to dancing at the bottom of the beautiful, briny sea. Bedknobs shares the story of three London children rehoused in rural England with a reluctant guardian, who happens to be a witch played by Angela Lansbury. Lansbury’s character has learned witchcraft via correspondence school (you read that right!), and she spends the film taking the three chidren on a quest to attain one last lesson she’s owed when the correspondence school suddenly ceases operation (probably because it’s literally the Blitz). In an action best described as questionable for a guardian, Lansbury bewitches a bed and uses it to fly the children to London (you know, the city they were just evacuated from) to find that lesson. They team up with the shady proprietor of the witch school (as you do), and go on more bed-related adventures. Eventually the Nazis attempt to invade, and more weird magic happens. Do the Nazis win? Does Lansbury keep the kids? And what about that shady magic school guy? Oh, and why would one find themselves playing soccer with a menagerie of talking animals? You gotta watch to find out!

Worth the watch? When the movie first came out, it didn’t have the greatest critical reception, but you know what? It’s fun, doesn’t take itself seriously, and combines epic 1970s movies effects, original music, live action and 2D animation into a family-friendly movie. It’s a blast that makes for great background viewing. Fans of Mary Poppins in particular might get a kick out of this movie.
Does it feature knitting or crochet? Angela Lansbury wears some excellent knitwear in this movie! Some of it seems a wee bit anachronistic for a WW2 era movie, but do I care when I have a great pompom to behold? No, not really.
Available to stream? It’s currently available to rent on several major streaming platforms. 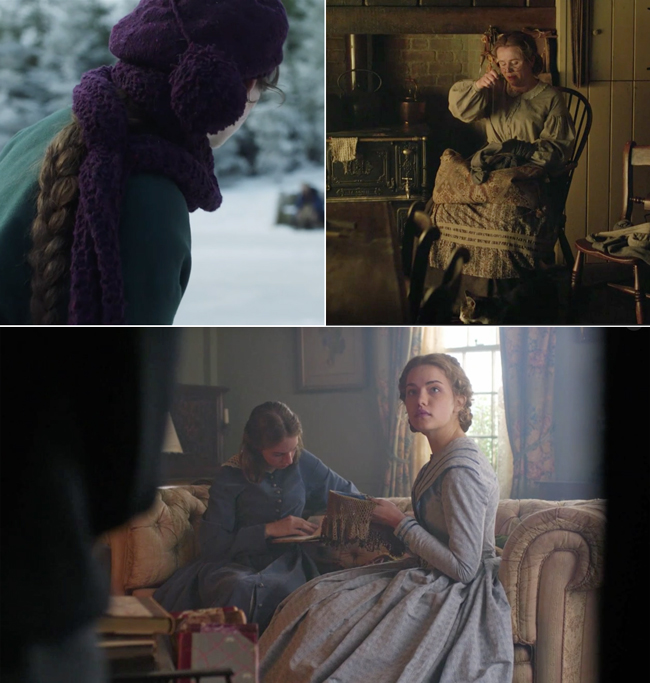 Speaking of pom poms and Angela Lansbury, this next pick also features those delightful things! At just 3 episodes, this super mini-series is the latest take on Louisa May Alcott’s classic novel of the same name. No, we’re not talking about the 1994 Winona Ryder/Christian Bale Little Women movie (though here’s where it’s currently available to stream since it’s also great Knitflix material). Today’s recommendation is the brand new Little Women miniseries that premiered on Mother’s Day on PBS in the U.S., and wrapped up last weekend.

For those of you who don’t know what Little Women is, the story follows the March family during the Civil War. Truly a coming of age story for the four March sisters, they explore all sorts of relatable things involved with becoming a woman: sibling rivalry, sickness, creative development, relationships, marriage, loss, and love. It’s really a heart squisher, to coin a phrase! If you have a fondness for the Winona Ryder movie, this is a fun, new take that has three, hour-or-so-long episodes to tackle the same iconic source material (so you get even more of the story you love)!

Worth the watch? At just over 3 hours in total watch time, I’d say yes, particularly if you love the book or movie.
Does it feature knitting or crochet? Boy howdy! I mean, making art in many forms is central to the narrative, but there’s a lot of charming mending and crafting scenes. (There are even two Christmas scenes set during the mid-1800s, so you know there’s a lot of handmaking to be had in those two alone!)
Available to stream? It’s currently available to stream for free on PBS, but hurry! It will only be up for a couple more weeks. After that, check here for streaming options. 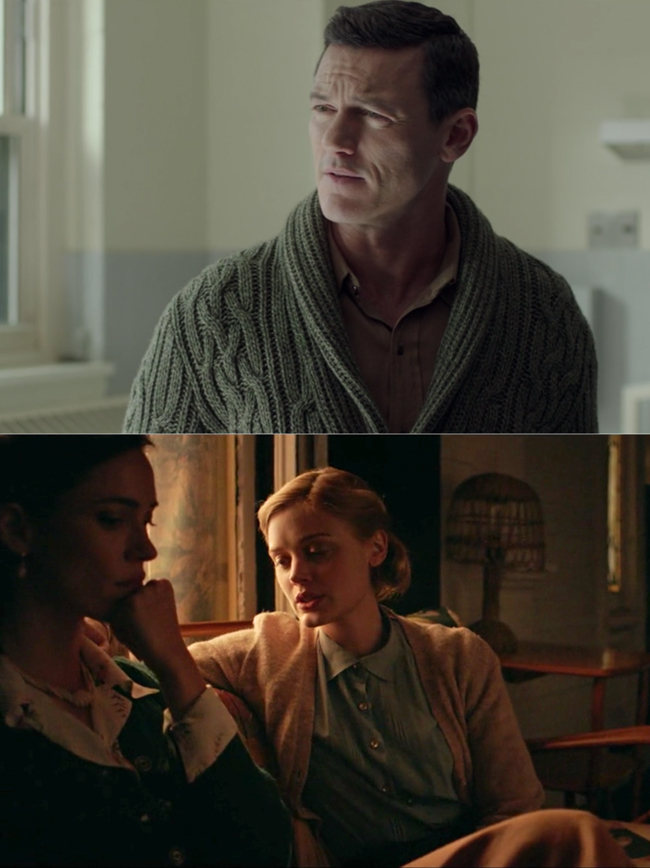 Professor Marston and the Wonder Women (2017)

Since spring is kind of Marvel season these days, with new film after new film being released throughout the season, it seemed fitting to include a super hero-related movie. Professor Marston and the Wonder Women is a fun watch with great costumes. It’s definitely an R rated movie “for strong sexual content including brief graphic images, and language,” just FYI. I enjoyed the film, set mostly in America in the 20s. The movie tells the story of American psychologist William Marston, the man who created Wonder Woman. Ultimately the story is about three people developing and navigating a polyamorous relationship during a not-so-progressive time in American history.

Worth the watch? If you are a fan of graphic novels and comics, or if you’re looking for a date night movie with a partner obsessed with Marvel movies, this is a fun option! Also, again, the costumes are gorgeous!
Does it feature knitting or crochet? There’s some knitwear in it, and not much in the way of fireside crafting scenes.
Available to stream? Indeed!

Apparently most of my picks today are all about handling evolving relationships… I wonder what that means? At any rate, if you have some ideas for future Knitflix posts, let me know! Help me figure out what to feature by submitting your ideas here, especially if they’re not a WW2 drama. We gotta mix it up next time! ;)