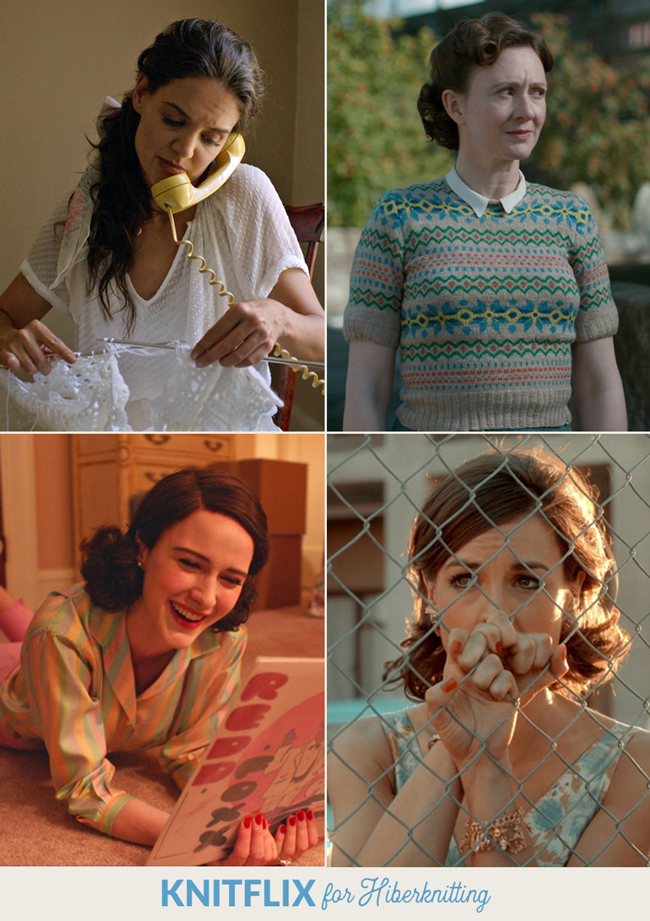 Knitflix, hiberknitting – we yarn folk do like our made up compound words don’t we? As mentioned in this week’s newsletter (which you can sign up for here if you’re so inclined), Chicago has been a big jerk with weather and temperatures careening all over the place. For folks all over the northern hemisphere, January is when hiberknitting becomes a thing. Hiberknitting is pretty much where we yarnies enjoy some well deserved indoor time with yarn as we hide from cold temps outdoors. In this installment of Knitflix, let’s take a look at the three shows I’ve been bingeing while making headway on January knit & crochet design deadlines.

BTW: Two of these are shows suggested by you, the readers, using the Knitflix suggestion form. Your ideas are super appreciated by everyone here – keep ’em coming! 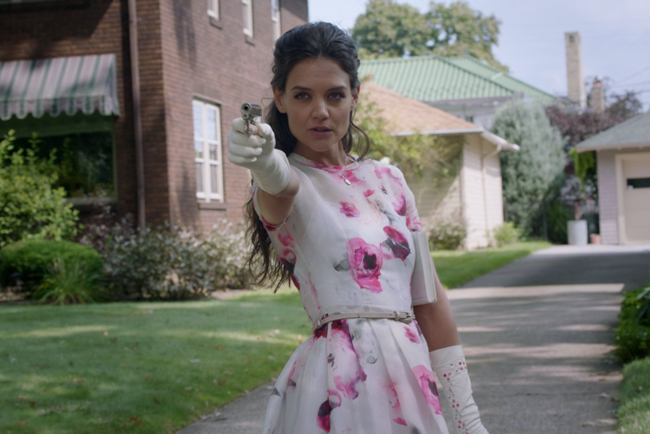 Miss Meadows is a well-mannered schoolteacher living in an evolving neighborhood. She sings in a church choir (just because she likes singing in choirs), has a compulsive tap dance habit, and she just so happens to be a vigilante. The town she’s recently moved to is experiencing a crime trend, and Miss Meadows is there to teach schoolchildren to say please and thank you in addition to directly and decisively deal with bad guys. This movie follows Miss Meadows as she navigates the world and attempts to have a life at the same time. 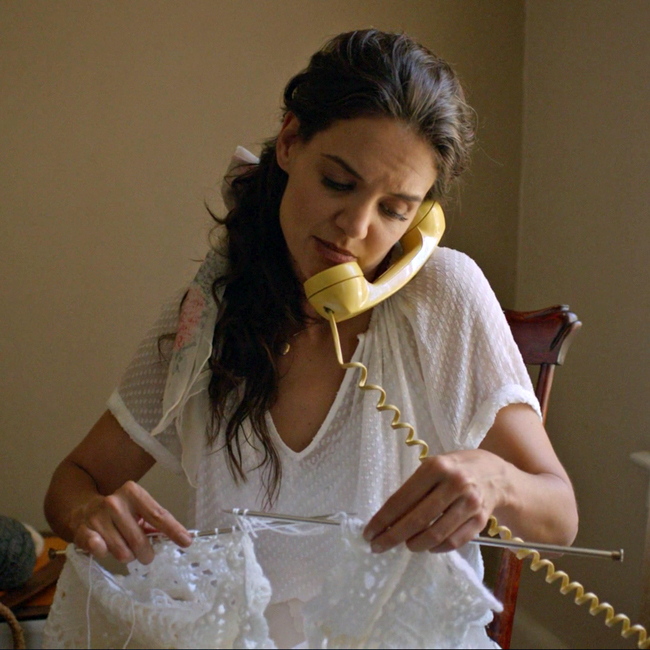 Worth the watch? A five star movie this is not, but this makes a quick and quirky addition to your Knitflix queue for sure.
Does it feature knitting or crochet? There’s a fairly important scene where “knitting” is happening on screen as Ms. Meadows speaks on the phone to her mother, but they screw it up in the most annoying way possible! Forgive the caps, but here goes: Two characters are knitting into a crochet project, which I get totally happens in movies and such sometimes, but not only are they knitting into crochet, THEIR KNITTING IS SUPER TERRIBLE. See above.
Available to stream? Here you go. 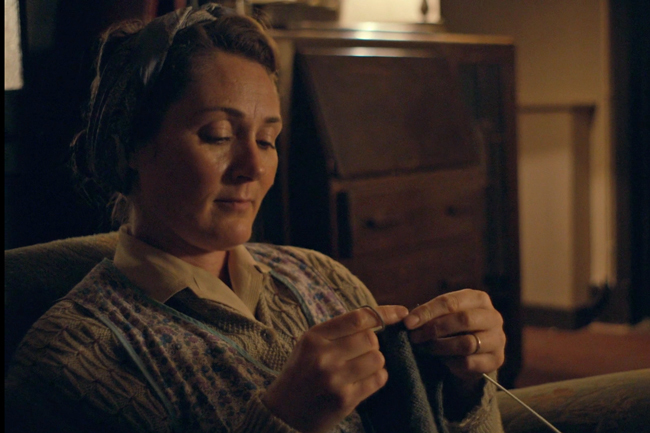 Tangent: Can we just pour one out real quick for commercial-free Sunday nights on PBS? Genuinely, go support your local station if you can. The programming is lit, as the kids say, especially for us knitters and crocheters. For instance, Call the Midwife, one of last month’s Knitflix picks, is a show I’d never have come across if it weren’t for PBS.

Home Fires is a two season show that first caught my attention on PBS on Sunday nights. The show is based on a nonfiction book called Jambusters that you’ll probably want to add to your to-read list after watching the show. This show is set in Britain during World War Two. With many of the men off to fight, a rural English town grapples with the reality of war that could make its way to the characters’ doorsteps. The local women’s league-style organization finds all kinds of ways to make do and mend, often lending that spirit to their friendships with each other. One of the projects that brings everyone together as a community is a drive to collect blackberries to make jam, which is endlessly charming. 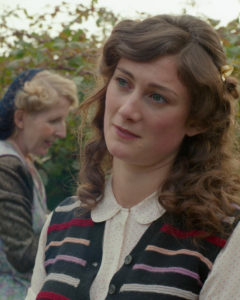 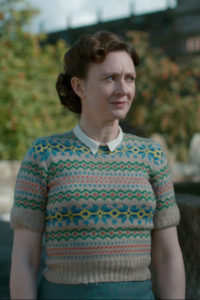 Worth the watch? If you’re down with WW2 content and British TV, this is…. (forgive me) the jam. But really, it’s a sweet little show. :)
Does it feature knitting or crochet? As with many binge-worthy shows that feature knitting or crochet, the prevalence of yarn has a lot to do with the trends of the times. Great knitwear can be found throughout the show, and in season 2, there’s on screen knitting in episode 5 that they don’t screw up. Well done, Home Fires!
Available to stream? Available on streaming & digital rental: see where. 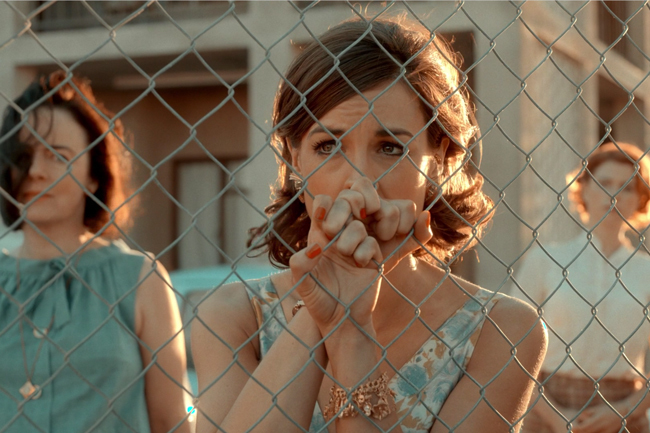 This show was suggested by a fellow lover of Call the Midwife. Fans of Midwife know that the show’s beloved lead actress, Jessica Raine, from the first few seasons left the show in 2014. If you want to see Raine take on a supporting role as a complicated English military wife in the Middle East in the ’60s (again, the costumes RULE in this one), this is for you.

Plot-wise, The Last Post follows a British Army unit in Aden, Yemen as they deal with insurgents, the harsh climate, and the struggles of daily life. Without delving too deeply into the politics of the situation, the show’s intro has the following voiceover speech from multiple newsreels* that offers a teensy bit of insight into the vibe of the show: “Aden, where East meets West. Vital as an oil refinery, as well as a Gulf trade route. […] The beach here at Aden is lovely. The sand is warm and the sharks are not always hungry. […] The Queen has full confidence in Aden’s future, describing it as the perfect example of Colonial Rule.” **

*I don’t know the provenance of the newsreel audio used in the show intro. **All capital letters are my best guess.

Worth the watch? The hot setting of this one is a great escape from winter cold, but it’s not my favorite show of all time.
Does it feature knitting or crochet? Nope, but there’s some sewing.
Available to stream? Currently available to buy or rent: see where. 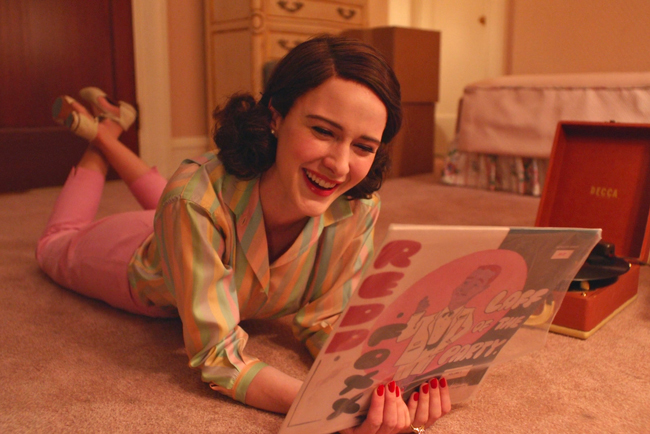 This show has lots of awards buzz around it, but I was lucky enough to get wind of this fun show before all of that colored my opinion. It’s funny, irreverent, stylish, feminist and an easy one to binge. Set in the late 1950s, Miriam Maisel has a picture perfect, privileged Upper West Side New York life. Until her husband, who she’s been almost cartoonishly supportive of, up and leaves. By happy, alcohol-infused accident, she almost literally stumbles upon a talent she didn’t know of – stand up comedy. The rest of the first season of the show (that’s all that’s out so far) is spent following the misadventures of Mrs. Maisel as she continues to raise her two children, develop her career, and juggles her family in a less-than feminist set of worlds. Fans of Gilmore Girls, be advised if you weren’t already, this show was created by the same woman, Amy Sherman-Palladino.

Worth the watch? This would-be R-rated show is tons of fun. Folks dealing with young motherhood, career issues, the end of a relationship, and more can find something to relate and laugh to in this show.
Does it feature knitting or crochet? One of the sets returned to a few times is a garment factory, so there’s some sewing. Speaking of which, the costumes are fantastic. If you love vintage anything, this show is full of eye candy for you!
Available to stream? It’s an Amazon-produced show, so spoiler alert: here’s where it’s available.

Have your own ideas for Knitflix? Help me figure out what to feature by submitting your ideas here.