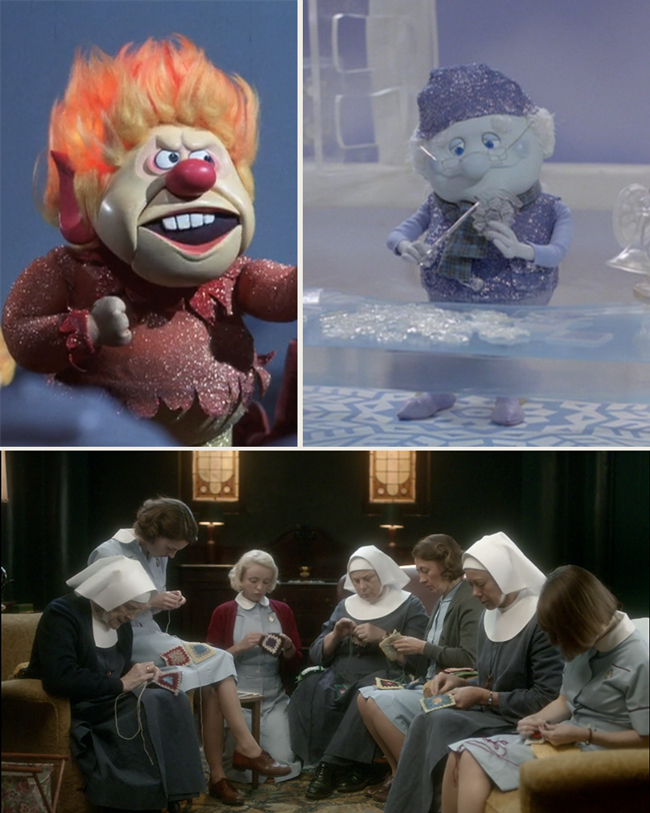 What is Knitflix? This post explains it all & how you can submit ideas for the next installment.

A lot of us are going to be spending the next couple weekends finishing up gift knitting, crochet and other crafts. So that means it’s time for another installment of Knitflix, the series that recommends tv shows, podcasts, audiobooks and more especially for knitters and crocheters. This holiday edition of Knitflix features some of the shows nearest and dearest to my holiday-obsessed heart, Call the Midwife and the holiday specials of Rankin Bass (you’ll know ’em when you see ’em).

This is a show that was definitely on my radar for this Knitflix blog series way before a TON of you submitted it (which you can do here) as a favorite show for yarn crafting. I’ve even got my mom hooked on this show – she managed to watch all six seasons of it on Netflix within a couple months of my introducing it to her. Call the Midwife is a great one for when you want to feel good about the world and ogle beautiful vintage sewing and yarn crafts at the same time. One of the lovely ladies who submitted Call the Midwife as a suggestion for this series had this to say:

I think it’s important to show that knitting has a long history, that as potential mothers, fathers, big sisters, grandparents, etc., we want to handcraft beautiful items for our babies. The items we create are meant to provide warmth and beauty, and made with love.

I think she captured exactly what I love about Call the Midwife. The show primarily takes place in a poor area of London in the late Fifties and Sixties, and follows the careers of young women working as midwives with a group of nuns. They are exposed, some of them for the first time, to the harsh realities of poverty, particularly for women. Handcrafts are used in this community as a way to not only clothe people and newborns, but as a physical embodiment of love for another, sometimes when words fail. For me, Call the Midwife consistently depicts everything I love about crafting, and it’s a good one to watch if you’re looking for a good cry every couple of episodes. <3

Worth the watch? Yeah, for sure.
Does it feature knitting or crochet? Yes. However, Call the Midwife manages to make some major mistakes in terms of actors poking at granny squares with knitting needles. Literally that happens in an episode. But it’s such a good show I’m willing to plug my ears and say “lalala” because there’s so much good, vintage crafting content. Starting in one of the middle seasons of the show, there’s a new character who runs a little craft shop filled with bolts of fabric and skeins of yarn. And if I remember correctly, she even has an open/closed sign that’s a ball of yarn with needles poking out of it. Perfect, they are not. But I don’t care. :)
Available to stream? Yep! As of this writing, 6 seasons are available on Netflix, and you can find full streaming details here.

Anything & Everything by Rankin Bass, obviously.

You know Dasher, and Dancer, and Prancer, and Vixen. Comet, and Cupid, and Donner and Blitzen. And you know that Rudolph stop motion-animated Christmas special, right? Well, if you’re a person of a certain age, you’ll already know that Rudolph the Red Nosed Reindeer is just one of literally dozens and dozens of animated holiday TV specials by a company known as Rankin Bass. Over the years, Rankin Bass produced traditional cel-animated (2D/cartoon) specials as well as their iconic stop motion productions. (If you’d like to dive down a deep well of internet research about these specials, the Rankin Bass Wikipedia page isn’t a bad place to start.) Holiday-wise, they covered a lot of territory: Rudolph, Frosty the Snowman, the Little Drummer Boy, an origin story for Santa Claus, and more. Many of their specials were inspired by Christmas tunes, but others were inspired by things like the poem ‘Twas the Night Before Christmas. Rankin Bass was prolific and so popular that they were creating original content too, like The Year Without a Santa Claus, which gave the world Snow Miser and Heat Miser (see below). My personal favorite of all of the Rankin Bass specials is far and away Santa Claus is Comin’ to Town, the aforementioned Santa Claus origin story, featuring Fred Astaire as a mail man delivering letters to Santa and Mickey Rooney voicing the big man himself. Plus the bad guy is a man named Burgermeister Meisterburger. It’s just so charming!

from The Year Without a Santa Claus (1974)
Worth the watch? At least one or two of these are definitely worth the watch, but they are all part of a very tight brand. If you love Rankin Bass as I do, that’s cool because you don’t mind their formula. However, doing a hardcore marathon of more than a few in a sitting could become a little much if you’re not about this particular brand of, well, weirdness.
Does it feature knitting or crochet? Yeah, from time to time. For example, Santa Claus is Comin’ to Town, stockings get laundered and play a part in building Santa Claus’s origin story. Elves make toys and do various crafts in Rudolph. In Jack Frost, a character named Snip handcrafts every snowflake in the whole world (youch, my tendons hurt every time I contemplate this character, btw). Since the stop motion specials are all handcrafted, getting to behold the handmade spectacle of it all is where the real relevance for Knitflixers comes in.
Available to stream? A bunch of them are available in full on YouTube, Little Drummer Boy for example, but you can’t count on them to be uploaded legally. They disappear all the time. I recommend searching this website for individual specials by name – that site lets you know what streaming services a given special is currently available on and whether or not they stream for free. If you can’t remember the exact name of a childhood favorite you’d like to search for, the Rankin Bass Wikipedia page comes in handy for jogging your memory.

Do you have any other favorite shows, podcasts or audiobooks for Knitlfix?

A big thank you to everyone who’s been submitting Knitflix ideas! Keep ’em coming – with cold weather season upon us, it’s prime binge crafting & watching time, particularly once the new year is here. Submit your ideas here, or use the Knitflix submission button (the blue box) below each post to send them any time.