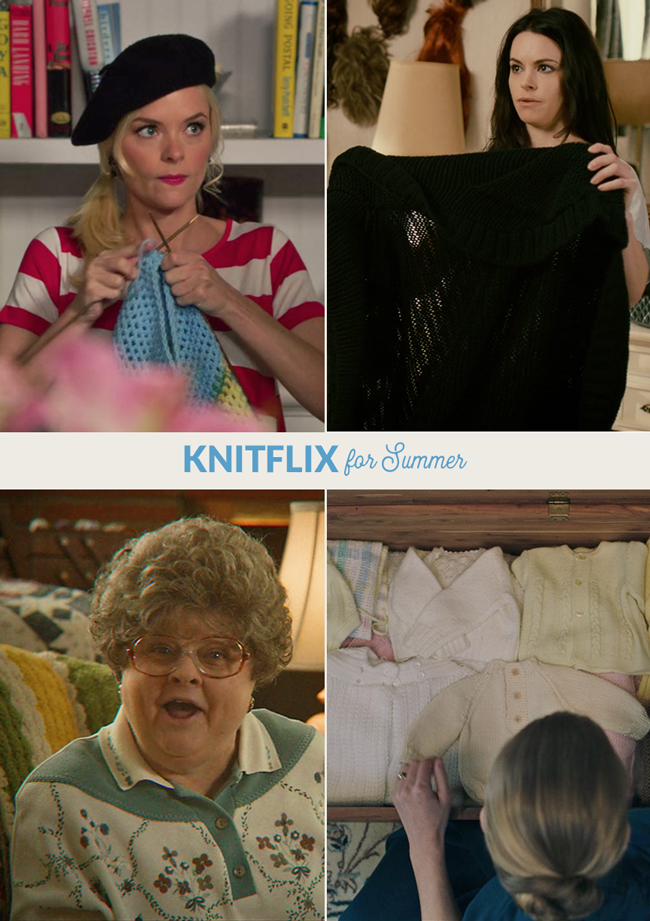 It’s summertime, which means it’s the perfect time to binge watch shows online while cranking out our favorite knit and crochet projects – especially on long, hot days. For me, summer is where binge watching was born. Back in the day, there would be inevitable gaps between high school summer programs or chunks of time between work & summer classes in college. Using that time, I’d plow through disc after disc of my Netflix subscription (hello, early 2000s!), watching shows like Sopranos, Deadwood or Scrubs. Now that we’ve evolved past marathoning disc after disc of TV box sets into the realm of streaming, our summer Knitflix possibilities are endless!

Sometimes figuring out what to watch among so many great choices can be a challenge, so let’s take a closer look at four great picks and whether or not they include any good crafting content! 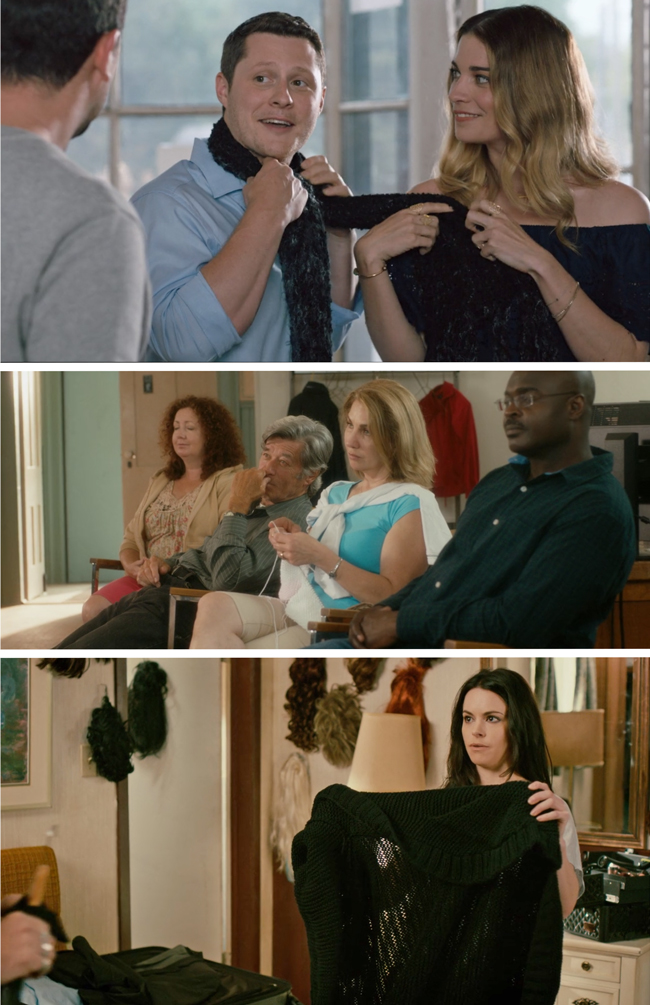 I can’t get enough of this hilarious show! Schitt’s Creek is a Canadian TV show featuring the Rose family who have managed to go from extreme wealth to losing it all very suddenly. They find themselves forced to live in a motel in the small town of Schitt’s Creek, and general hilarity ensues as four very poorly adjusted adults learn to ride a bike, run for local political office, and handle day to day trials and tribulations they are completely unequipped for. The premise might sound like well trod comedic territory, but with stars like Eugene Levy and Catherine O’hara, you won’t be disappointed.

Worth the watch? This is the funniest comedy you’ve never heard of, scout’s honor. Yes.
Does it feature knitting or crochet? David, the son, has a deep reverence for knitwear that repeatedly crops up. It’s clear he couldn’t knit a sweater if he tried, but he sure knows a lot about caring for fine fibers. Also the show features lines like, “one chromosome away from a crochet blanket.” Clearly someone writing this show understands making, as well as the difference between knit & crochet!
Available to stream? Indeed.

Heck yes, bingeing dramas for teens! Hart of Dixie was a show on the CW starring Rachel Bilson of The O.C. fame. The premise: a Big City doctor finds out the man she thought was her father was not. Her biological father was a small town doctor who passed away, leaving her a small town medical practice in Bluebell, Alabama. Many, many romantic entanglements and love triangles (and squares!) form the cornerstone of this lovable show.

Worth the watch? If you’re looking for some low-impact relationship drama among attractive 30-year-olds (of course played by folks approaching 40), this show is a great one.
Does it feature knitting or crochet? Over the course of the show’s 4 seasons, crafting comes up a few times. In season 2, episode 11, there’s a bit where Zoe Hart (the titular character) uses “projects” ranging from candle making to quilting to avoid conflict with a new boyfriend. A couple of secondary characters, Tom & Wanda, spend part of that same season pining for alpacas and notably listing the potential for homegrown knitwear. And notably in season 3, a human named Lemon commits the cardinal sin of “knitting” into a piece of crochet (pictured above).
Available to stream? As of this writing, all 4 seasons are available to stream. 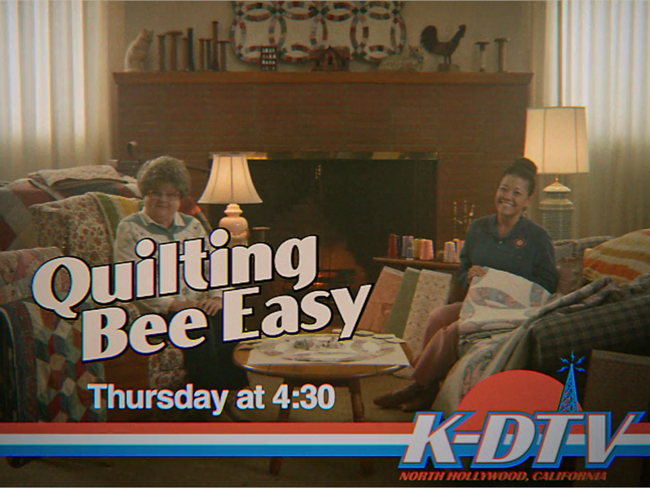 80s fans, rejoice! This Netflix-produced show is about the real-life Gorgeous Ladies of Wrestling (G.L.O.W.), a professional women’s wrestling organization/TV show founded in the mid-1980s & inspired by men’s wrestling leagues. The show Glow follows several underdogs who are all aspiring entertainers looking for their big break. Season one covers the development and launch of the league and corresponding television program, and season two follows the ups and downs of the show once it’s launched. A mix of comedy and a dash of drama combined with the campy back drop of women’s wrestling in 1986 makes this a fun watch.

Worth the watch? It’s pretty fun, especially if you love rooting for underdogs.
Does it feature knitting or crochet? Nope, but season 2 episode 8 is formatted as an entire episode of the show GLOW itself, commercials and all. Since GLOW is supposed to be running on a small local TV station, it features commercials for other low-budget shows, most notably Quilting Bee Easy. Now I want a throwback show that’s literally Quilting Bee Easy – can that happen please, Netflix? :)
Available to stream? A show made for and by Netflix? Of course it’s streaming. 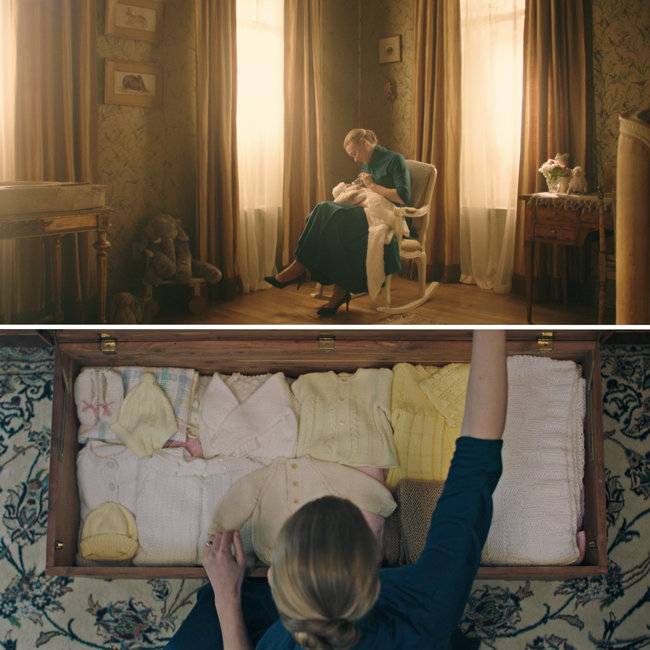 Last but not least, The Handmaid’s Tale is, of course, currently nearing the end of its second season on Hulu. This show is hugely popular right now, but its knitting and crochet content makes it worth the mention. Fans of the book upon which this show is based, Margaret Atwood’s The Handmaid’s Tale, might remember some knitting content. In the book, one of the activities allowed for women in this dystopian vision of America is knitting, and that aspect is continued in the show. Here and there in the show you can find the wives of powerful men knitting and crocheting to entertain themselves as they live in a world where women aren’t even allowed to read or write.

Worth the watch? If you can stomach the very intense subject matter, it’s pretty great.
Does it feature knitting or crochet? Plenty, particularly in season two!
Available to stream? It’s a show produced by & for Hulu, so yes, 100%.
Bonus: The audiobook for The Handmaid’s Tale is pretty great. It’s even on my shortlist for a future Read Along!

If you’re looking for other Knitflix picks, you can view all past Knitflix posts right here. And as always, if you have ideas for future Knitflix posts, let me know! Help me figure out what to feature by submitting your ideas here. For this post, The Handmaid’s Tale was suggested by a few of you – thank you! :)